Market Pulse section compiled by Suzann Silverman. To comment, email [email protected] Multifamily Starts: Housing starts of buildings with five or more units rose by 8.3 percent over the month of July 2016 to a seasonally adjusted annual rate of 433,000. This is the highest level of five or more unit housing starts since September 2015. […] 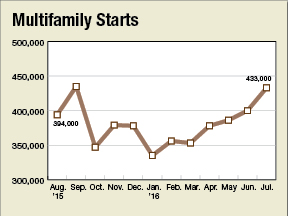 Meanwhile, the National Association of Home Builders’ (NAHB) Multifamily Production Index (MPI) dropped three points to 50 in the second quarter of 2016 (Exhibit 1). This is the 18th consecutive reading of 50 or above, which means that more builders and developers report that current conditions in the apartment and condominium market are improving than report conditions are getting worse. According to NAHB analysis, the MPI results for the second quarter are still consistent with the NAHB forecast of a leveling off in multifamily production for this year. 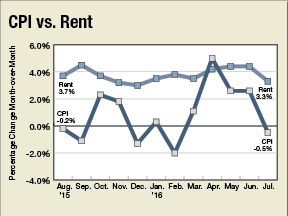 Over the month of July 2016, headline consumer price growth (CPI) slowed to a standstill. Food prices were unchanged over the month. However, this was an improvement from two consecutive months of declines. Energy prices swung from a 1.3 percent increase in June to a 1.6 percent decline in July as gasoline prices fell by 4.7 percent in July following a 3.3 percent increase in June. Excluding the more volatile prices of energy and food, “core-CPI” rose by 0.1 percent, slower than the 0.2 percent monthly rate of growth recorded in June. Shelter prices, which account for the largest portion of consumer expenditures, rose by 0.2 percent in July, 0.1 percentage point slower than its growth rate in June. Rental prices, a component of overall shelter prices, grew by 0.3 percent over the month, faster than overall shelter prices by 0.1 percentage point slower than its growth rate in June. Since the increase in rental prices exceeded the monthly rise in overall inflation, as measured by core-CPI, then NAHB’s Real Rent Index rose, again increasing by 0.2 percent on a monthly basis. Over the past 12 months, the Real Rent Index has risen by 1.6 percent. 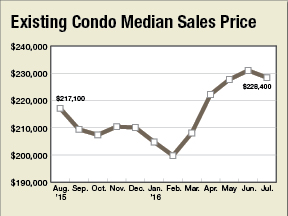 Sales of existing condos and co-ops, measured on a seasonally adjusted annual rate, fell by 12.3 percent in July. Monthly declines were recorded across each region of the country. The Northeast, -16.7 percent, the South, -13.8 percent, and the Midwest, -12.5 percent, all reported month-over-month decreases that exceeded the national rate while the West recorded a smaller monthly fall, -6.3 percent. While sales fell nationwide, the inventory of existing condos and co-ops rose by 7.3 percent over the month. There are an estimated 251,000 condos and co-ops in inventory. Since the pace of inventory growth, which was positive, exceeded the rate of increase in sales, which was negative, then the months’ supply, which represents the number of months it would take to exhaust the existing condo and co-op inventory at the current sales pace, rose, increasing 23.3 percent over the month to 5.3 months. Median existing condo and co-op sales prices rose by 4.1 percent on a not seasonally adjusted basis over the past year to $228,400. 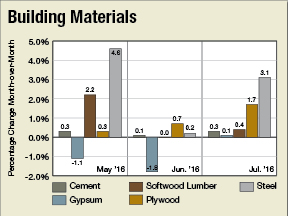 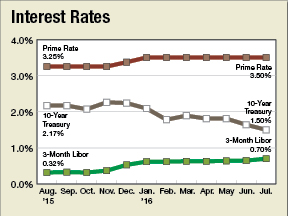