Commentary and data were supplied by a senior economist with the National Association of Home Builders (NAHB). 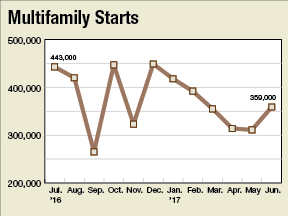 According to the U.S. Census Bureau and the U.S. Department of Housing and Urban Development, starts of buildings with five or more units, measured at a seasonally adjusted annual rate, rose by 15.4 percent over the month of June 2017 to 359,000, after five consecutive months of decline. Over the past 12 months, starts of buildings with five or more units declined 10.7 percent. The annual decrease recorded in June is the fourth consecutive decline. The annual decreases may partly reflect weakness in the multifamily sector as well as some pullback following stronger gains during the December 2016-February 2017 period. 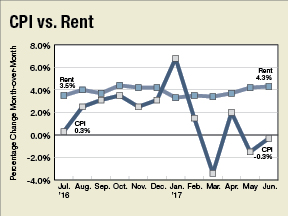 The headline consumer price index (CPI) was unchanged in June on a seasonally adjusted basis, following the 0.1 percent decline in May. Over the month of June, the Energy Price Index decreased by 1.6 percent, slower than the 2.7 percent decline in May. Meanwhile, food prices were unchanged in June, after the 0.1 percent increase in May. Excluding historically volatile food and energy prices, “core” CPI rose by 0.1 percent in June. Shelter prices, which are the largest consumer expenditure category, grew by 0.2 percent as rental prices, a component of the shelter index, grew by 0.3 percent in June. Since the increase in rental prices exceeded the growth in overall inflation, as measured by core-CPI, then NAHB’s Real Rent Index rose over the month, increasing by 0.2 percent. Over the past year, NAHB’s Real Rent Index rose by 2.1 percent. 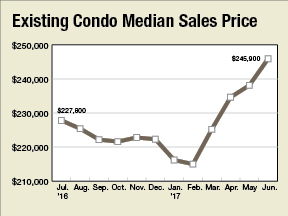 Sales of existing condominiums and cooperatives in June 2017 were 640,000 units, unchanged from last month. Regionally, sales in the Midwest and West were unchanged. Meanwhile, sales in the Northeast rose by 9.1 percent while sales in the South decreased by 3.4 percent. The months’ supply of homes slightly declined to 4.1 months. Median prices on condos and co-ops nationwide rose by 6.5 percent over the past year to $245,900 in June. Median prices in the Northeast rose by 7.9 percent and in the West increased by 7.2 percent while price growth in the other two regions of the country lagged the nationwide rate. Condo and co-op prices in the Midwest grew by 5.4 percent and prices in the South climbed 6.0 percent. 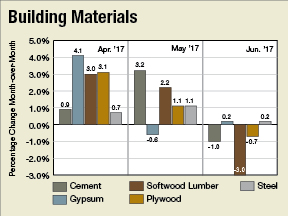 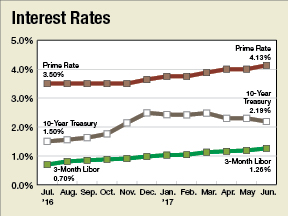 Jing Fu is a senior economist at NAHB. She monitors developments in the economy to identify trends and issues related to the housing industry. She also assists in forecasting and analyzing the state and metropolitan area housing market, producing research and articles detailing sectors and the geography of the home building industry. Prior to joining NAHB, Jing worked at Thomson Reuters as a data specialist and has extensive knowledge and experience on quantitative research and large data set analysis. She holds an M.A. in Economics from the University of Kansas and is currently completing the requirements for her Ph.D.