Crystal Lagoons CEO Uri Man explains the technology behind a powerful amenity that (surprisingly) uses up to 30 times less water than an 18-hole golf course. 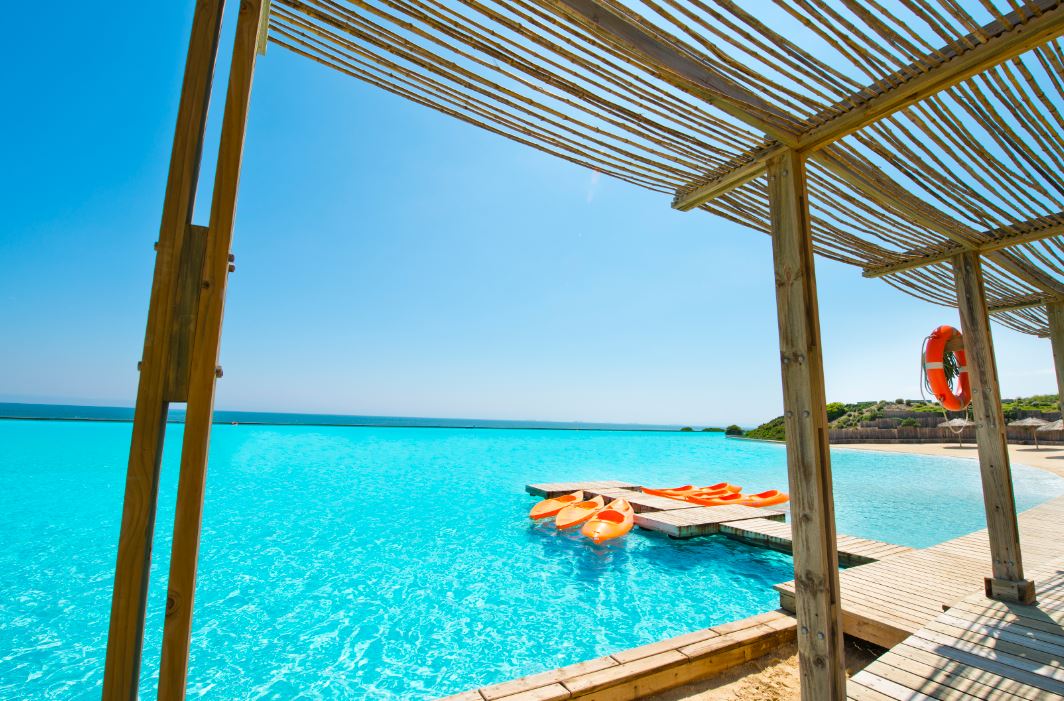 Crystal Lagoons is a revolutionary new amenity concept that can transform any destination into an idyllic beach paradise or a festive winter wonderland, allowing year-round use. Through the company’s cutting edge technology, these lagoons can be built at low construction and maintenance costs
while providing a feature that can be enjoyed by people of every age. They also give developers and real estate projects greater value, in addition to being environmentally friendly.

MHN Associate Editor Alex Lopez caught up with Crystal Lagoons’ CEO Uri Man, former Related Group and Gables Residential developer, to speak at length about these projects that are changing the quality of relaxation and recreation at multifamily developments around the world.

What are Crystal Lagoons and why are they so popular with developers and investors?
Crystal Lagoons is a technology company. We enable real estate, multifamily, single-family, master-planned community and resort developers to create unlimited-sized, crystal-clear lagoons at a very low cost. Our founder, Fernando Fishman, was a very successful real estate developer in South America and he bought a piece of property on the coast of Chile, about 100 kilometers from the capital. The property was right on the water, but the water there doesn’t go above 50 degrees and there are very strong rip currents in the ocean so people aren’t allowed to go bathing.

Because he wanted to build second-home residences there, Fishman decided to build a giant lagoon that would imitate the color of the water in the Caribbean and be a safe place for swimming and watersports. He hired a local engineering company that promised him a technology that would make it economically viable to clear the water without using certain antiquated pool filtration equipment. It failed. For the next five years, our founder (who had
also studied biochemistry at university) set up a lab and invented a new way to clear the water that would be economically viable.

It enabled the most successful real estate project in South America, San Alfonso Del Mar. The project was originally supposed to be 400 units, but
it ended up being 1,400 units. It set all sorts of records in terms of sales velocity. It really put the technology on the map. This project got the Guinness World Record for the largest lagoon in the world by surface area in 2007. Then developers wanted to use this technology, so our founder decided to package it, patent it—we’re the only company in the world that can do it—and license the technology to real estate developers so that they can go ahead and use it.

What’s the science behind Crystal Lagoons?
The difference with this technology versus antiquated pool filtration technology is it uses 100 times fewer chemicals. Rather than having a high chlorine barrier like a pool does, we have a telemetry system around the lagoon. The telemetry system measures many different parameters of the water, like the PH temperature and others. Based on those measurements, we are injecting a small amount of chemicals in atoms, but only in the locations that they’re needed. This is basically a smart-pulse disinfection system, which makes it economically viable. The net result uses 100 times less chemicals than typical swimming pools on a per-volume basis.

Then, instead of turning over the water through sand-filters, like pools do—which is extremely expensive and uses a huge amount of energy—we invented a new low-cost ultrasonic filtration system. This basically uses sound waves to push all the dirt until it flocks and falls to the ground, then we have a giant suction cart, which we invented, that travels on the bottom of the floor and suctions the dirt as well as 1 to 2 percent of the water. Because of this we’re able to use 50 times less energy than a swimming pool does, on a per-volume basis. Those two aspects, with specially designed equipment that we invented and the fact that we have
evaporation controls for the water, is what makes the company really unique and makes us the only company in the world that can offer it. A 10-acre lagoon compared to an 18-hole golf course will use 30 times less water on an annual basis. It’s not obvious because you see this big body of water, but the make-up water you’re adding every year is much less.

Speaking of water, how are shortages across the globe impacting Crystal Lagoons?
We always recommend developers use salt water or brackish water because we can use almost any source of water. Very rarely will they use fresh potable water. For example, in California where there are droughts, there are still salt water aquaphors deep in the ground, so that’s the type of water that’s being used there. The developer can continue accessing water during the drought and it’s not impacted. The amazing thing about our amenity is how environmentally sustainable it is. So because of the drought, some developers are choosing to replace golf courses with our lagoons because they use dramatically less water.

How have your experiences at Gables Residential, The Related Group, Goldman Sachs and Barclays Capital helped inform your work at Crystal Lagoons?
My past experience working as a developer has helped me because I’m able to explain the benefits on the lagoon to developers and work with them as part of their team to come up with a design that will maximize the success of the project. We work with the developer and provide them with conceptual designs for the lagoon and show them how they can leverage it to impact their real estate projects, and I’m very much a part of the process. 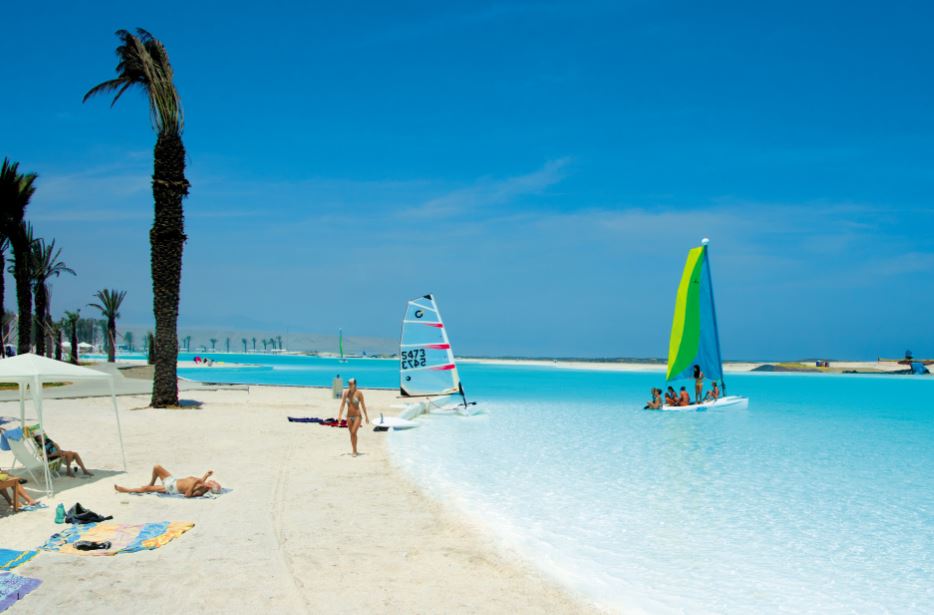 Where have Crystal Lagoons been installed?
These lagoons are not just being used for recreation. They’re also being used for industrial purposes such as the cooling of thermo-electrical power plants. We have 10 projects that have been announced in Florida, one with the company Tavistock in Lake Nona in Orlando. That’s a multifamily project around a 12-acre lagoon. Then we have four single-family home communities with a company called Metro Development Group. Those are mostly in the Pasco County market. We also have a project in Kissimmee, Fla., with a company called Green Gate. Sharma El Sheikh is a project in the middle of the desert, near the
Red Sea. The developer bought the property that was thought to be useless and built a 30-acre lagoon. This one recently just got the new Guinness World Record for the largest [man-made lagoon] in the world. Basically, this is 30 acres of surface water and it’s anchored by three resorts.

We have a project in India that’s very interesting. The lagoon is going to be the canal system for taxis in the middle of a new city, which will have multifamily, office buildings and so forth. The other thing we’re doing is transforming city and state parks into public lagoons. Instead of having a park where 10 to 15 people show up with their dogs, you can have this beautiful amenity that can be used for waterfront dining, paddle boarding, kayaking and promotes the healthy active lifestyle that cities want to promote, offering an amenity that really increases the quality of life, increases property value around the lagoon and differentiates the city from others. Also, we just announced that we’re doing the new Hard Rock Hotel in Mexico on the Riviera Maya, which will be the largest Hard Rock Hotel.

What has been the company’s most challenging project so far?
The most notable that’s been announced is a project in North Miami with LeFrak and Turnberry. The project’s called SoLe Mia. The two developers are very well respected and they’ve come together to differentiate their 4,400-unit property from other mixed-use projects with two 10-acre lagoons and it’s one of the largest projects there. It’s going to substantially change the entire North Miami area.

What do you expect for the future of Crystal Lagoons?
We’re revolutionizing real estate development. Property prices around the lagoon jump, and we see increases in sales velocity. Our clients report five to 10 times faster sales because they have this beautiful lagoon as a centerpiece.

We now participate in more than 300 projects in 60 different countries and you can see how the lagoon transforms a site that isn’t viable into an economically viable development. A recent study by Boston Consulting Group estimated that more than 2,000 lagoons would be built in the United States in the next 15 years.
The new thing we’re doing is a floating lagoon. We’re deploying our technology to clean the water, but in a bladder system that’s connected to a floating dock system. So you can transform an existing lake that’s unattractive into a beautiful amenity for people to go swimming with crystal clear water, using the same water from the existing lake, so it’s a pretty powerful concept.