The community last traded earlier this year, with the seller implementing upgrades in the meantime. 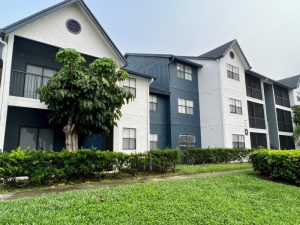 Lynd Living has sold the 290-unit Aqua Villa in Margate, Fla., for $66.5 million, after just eight months of ownership. The listing agent was Hampton Beebe of Newmark.

The community last traded in March, when Lynd Living bought it for $50.8 million. The firm spent $4 million to renovate the property. Improvements included the addition of chef’s kitchens to three-bedroom units. The community has two pools, a clubhouse and a fitness studio.

The property, previously known as The Lakes at Margate, was built in 1987 and has one- to three-bedroom units, ranging from 660 to 1,065 square feet, according to Yardi Matrix data.

Located at 5750 Lakeside Drive, the community is near the intersection of West Atlantic Boulevard and North State Road 7. Lakewood Mall is some 2 miles south of the community, while Margate Library is 1 mile west. Several other retail, dining and entertainment options are available within a 1-mile radius.

Rents in the area have grown by more than 20 percent since Lynd Living acquired the asset. The company has achieved its projected five-year net proceeds for investors and partners in these eight months, David Lynd, the company’s CEO, said in prepared remarks.

Lynd Living was set to buy the asset in March 2020, but its equity partner backed out, so the transaction became less certain. Lynd Living then used crowd-sourced equity to help fund the acquisition of the property.