Construction is slated to begin in a matter of weeks. 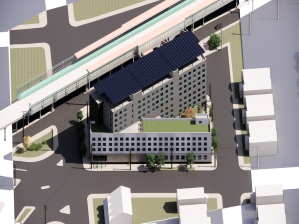 A joint venture including L+M Development Partners, The Bluestone Organization and Triangle Equities has received $95.7 million in financing for a mixed-use, fully affordable project in Far Rockaway, in the New York City borough of Queens.

Beach Green Dunes III is set to include 146 affordable units, a transit plaza and a community facility, as well as commercial and retail space. Bernheimer Architecture designed the project, with construction slated to begin in a matter of weeks.

Financing for the development was provided through:

Beach Green Dunes III is a Passive House certified project, including a handful of sustainability and resiliency features, such as smart controls, photovoltaic panels on the roofs and a closed-loop geothermal system which will provide cooling, heating and domestic hot water.

The eight-story building will encompass studios, one-, two- and three-bedroom units designated for tenants earning between 30 and 80 percent of the area median income. Some of the studios and one-bedroom apartments will be set aside for residents over 62.

Common-area amenities will include a fitness area, a community room, outdoor recreational spaces, a rooftop deck, parking garage and laundry facilities. The community will also feature a transit plaza with pedestrian access to Edgemere A Train subway station, 1,160 square feet of community facility space and 2,100 square feet of retail and commercial space.

Located at 331 Beach 35th St., the development site is close to many retail spaces, schools and green areas, including Bayswater Park. Saint John’s Episcopal Hospital is only 1 mile away.

This is not the first time L+M, Triangle and Bluestone collaborated. The three companies are developing other affordable housing projects in the Rockaway Peninsula, such as Arverne East and Beach Green Dunes II.