JRK Buys 2 Assets Via $1B Fund

The properties are located within two of the nation's fastest-growing markets. 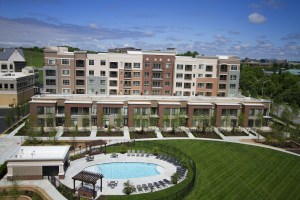 The first deal has already closed. JRK, a Los Angeles-based real estate investment and management firm, acquired Residences at Park Place, a 258-unit luxury mid-rise and townhome community in Leawood, Kan., from VanTrust Real Estate. The firm is also under contract to purchase a luxury high-rise community in downtown Sarasota, Fla., from a separate seller in a transaction that is expected to close in March. Further details were not released about the pending Sarasota deal.

Annie Rice of JLL Capital Markets’ Los Angeles office arranged long-term financing for JRK to acquire Residences at Park Place. The loan has a fixed-rate of 4.78 percent over the entire term from Fannie Mae. Further details on the amount of the loan or purchase price were not disclosed.

JRK Platform V targets higher-quality, well-located multifamily properties built after 1990. Through its predecessor funds, JRK owns and operate $7 billion in multifamily assets in primary and secondary markets throughout the United States. The firm’s portfolio spans 26 states with more than 30,000 multifamily units as well as luxury and flagged hotels.

The two planned acquisitions are the first deployments from the new fund. James Broyer, JRK president of investments, said in a prepared statement the dramatic rise in interest rates in 2022 made it difficult to transact over the past year. He said the firm remained patient and disciplined during the market dislocation while waiting for the headwinds to begin to subside. Broyer said JRK has been able to acquire two outstanding assets with positive leverage to borrowing costs that will result in attractive yield for investors immediately.

JRK President Daniel Lippman said in a prepared statement that the two institutional quality assets are located in preeminent locations within rapidly growing markets and are being acquired for more than a 5.5 percent cap. He said the location and quality of the assets should insulate investors from additional cap rate expansion.

Lippman said they plan to take advantage of significant operational and physical value-add opportunities at both properties through renovations and JRK’s management of the assets.

Built in phases between 2014 and 2019 by VanTrust Real Estate, The Residences at Park Place is the residential component of Park Place Village, a master planned, mixed-use development featuring retail and dining offerings as well as nearly 500,000 square feet of office space. Leawood is located 25 miles south of downtown Kansas City, Mo., and is one of the state’s most affluent cities.

The Residences, which was 98 percent leased at closing, has three mid-rise apartment buildings with one-, two- and three-bedroom layouts and a separate four-story building with one- and two-bedroom loft units. Amenities include a saltwater swimming pool with resort-style outdoor cabana and grilling area, media and game rooms, coworking space, concierge services and two fitness facilities with massage rooms and Peloton Bikes, in addition to fitness-on-demand offerings and a sauna.

In March, JRK sold Centreport Lake, a 452-unit community in Fort Worth, Texas, to Marlin Spring, a Canadian investment firm, for $125 million.

The company made five acquisitions in the fourth quarter of 2021 for $390 million. The properties had more than 1,500 units in properties in Florida, Texas, Louisiana and Maine. The purchases were made in four separate transactions with two assets in Portland, Maine – the 500-unit Redbank Apartments Village and the 120-unit Liberty Commons, acquired as a two-property portfolio.