Laguna, a 158-unit new-construction apartment, has opened for leasing. 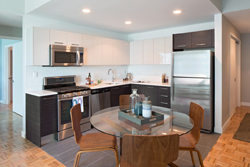 Jersey City, N.J.—Laguna, a 158-unit new-construction apartment in Jersey City, N.J., has opened for leasing. Already 40 percent preleased, the 19-story, Hudson River-waterfront building features one-, two- and three-bedroom units ranging in size from 760 square feet to 2,015 square feet. The Laguna is the first of the Newport master-planned community’s final phase, which will surround the neighborhood’s 4.25-acre park, Newport Green. The community is being developed by LeFrak.

The park features the only urban beach on the Hudson River, a 17,000-square-foot playground play equipment and a splash pad, a turf field and a carousel. It was opened in May.

Fronting the Hudson River, the 600-acre, privately owned Newport master-planned community began over a quarter of a century ago as abandoned piers and rail yards. Now it has eight office buildings, 13 apartment towers, two hotels, two schools and a mall, along with about 15,000 residents.

Seventeen Global Fortune 500 companies have established offices in Newport’s commercial campus, some of whom have moved operations from the more-expensive Manhattan, helping to stimulate demand for Newport’s residential properties. The next non-residential development in Newport will be Pier 6, which might include as much as 1.25 million square feet of office space.