Ivanhoé Cambridge has entered into a partnership to build Projet QB, a mixed-use complex that will feature more than 400 rental units and 200 condominiums in the Cité-Universitaire district of Quebec City. 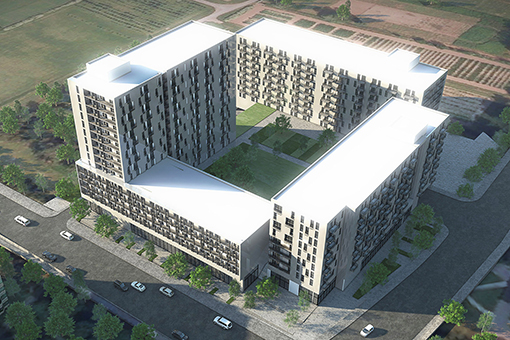 Montreal—Ivanhoé Cambridge has entered into a partnership to build Projet QB, a mixed-use complex that will feature more than 400 rental units and 200 condominiums in the Cité-Universitaire district of Quebec City.

“Location was definitely a compelling factor; opportunities for mixed developments in urban areas are rare and with the expected demand and the range of services both in and around the area will be great drivers,” Sylvain Fortier, executive VP, residential, hotels and real estate Funds at Ivanhoé Cambridge, tells MHN. “Urban transit is key, proximity to employment bases as well and to University Laval with 48 000 students. We also found partners, which had the expertise, the contacts and the capacity to execute this development.”

The company’s initial investment will be more than $50 million, in partnership with a group of local investors led by Pierre Moffet and under a co-development agreement with SDLP (the real estate division of Sobeys Inc.), will help revitalize an area of the city that is expected to experience exceptional growth.

Projet QB will initially comprise an apartment building containing about 300 rental units, a condo building with some 100 units, and a total of over 43,000 square feet of ground-floor commercial space.

The services offering will be enhanced in the district with the opening of an IGA supermarket on the ground floor of the complex, under the co-development agreement with SDLP, which will own and develop the complex’s commercial spaces.

“This is the first project of this kind that we are developing in Quebec City, and in co-ownership as well,” says Stanislas Malecki, Sobeys Inc.’s vice president development. “This future IGA Extra will clearly meet the needs of the neighborhood’s residents.”

According to Fortier, the current market shows strong employment and economics, very low vacancy for the rental product and a lack of differentiating products.

“This investment will help grow our multifamily/residential portfolio and continue to build critical mass in a city where we already have a significant presence in retail, office and a hotel, the Chateau Frontenac, one of the most photographed hotels in the world,” Fortier says. “Université Laval is the heart of the city. The access is also very easy with immediate access to urban transit and retail.”

In addition to being located near Université Laval, the complex will be less than a kilometer from Laurier Québec, Halles de Sainte-Foy, Place Ste-Foy and Cégep de Sainte-Foy, and a short distance from the Hôpital Laval.