A new report by Marcus & Millichap finds that supply of the property type is coming into alignment with demand. 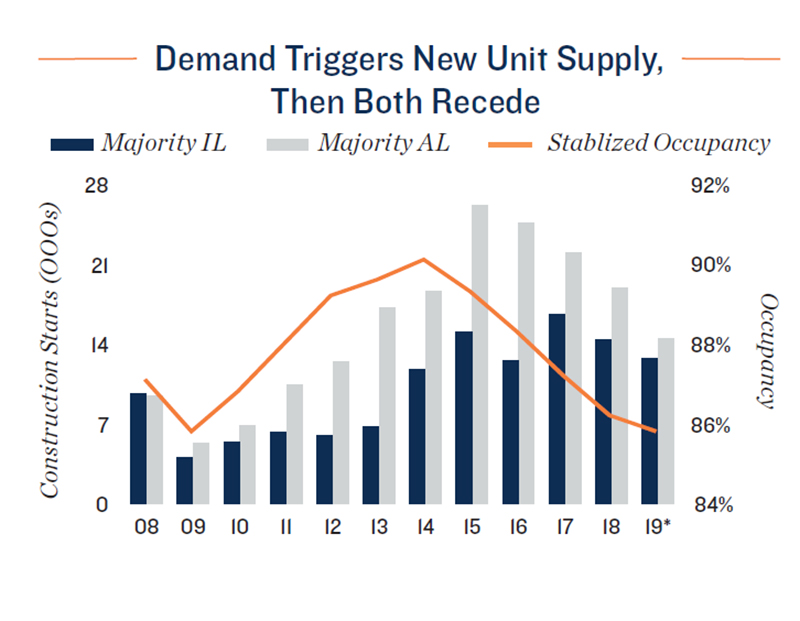 The outlook for the senior housing sector is bright, according to a new report by Marcus & Millichap, as an aging U.S. population, investor optimism and a construction cycle that shows signs of slowing point to increased demand-side pressure on the property type.

The national market report notes that the U.S. population of those aged 75 and older is projected to surge by 5 million over the next 5 years, a 22 percent gain—accelerating from the 2.8 million people added to the cohort over the previous half decade. Soaring healthcare spending is also expected to fuel demand for senior facilities, as national health expenditures are projected to account for 20 percent of gross domestic product by 2027, growing by 5.5 percent annually.

Marcus & Millichap also sees favorable trends on the supply side. As the country climbed out of the past recession, demand for senior housing ramped up, particularly in the assisted living segment. Supply accelerated to meet the new demand, with absorption robust until 2014, when nationwide senior housing occupancy peaked at 90.1 percent.

The opening of new units caused occupancy to slowly decline to 85.8 percent as of the second quarter of 2018, according to data cited by the report. But new construction starts are also falling as the current wave of development reaches its later stages, helping occupancy across some sectors to begin to bottom out.  The brokerage projects that stabilized occupancy will trend higher over the next 18 months as development activity weakens this year.

Investors are excited by the prospects for senior homes. According to a survey conducted last month by Marcus & Millichap in collaboration with National Real Estate Investor, 55 percent of investors consider now the time to buy senior housing assets, trumping all other property types, while 76 percent of investors in the sector believe the value of the properties in their portfolio will grow 12 months from now.