Inside the Deal: Oasis in Las Vegas

TruAmerica completed its latest acquisition in an off-market deal for $83.5 million. 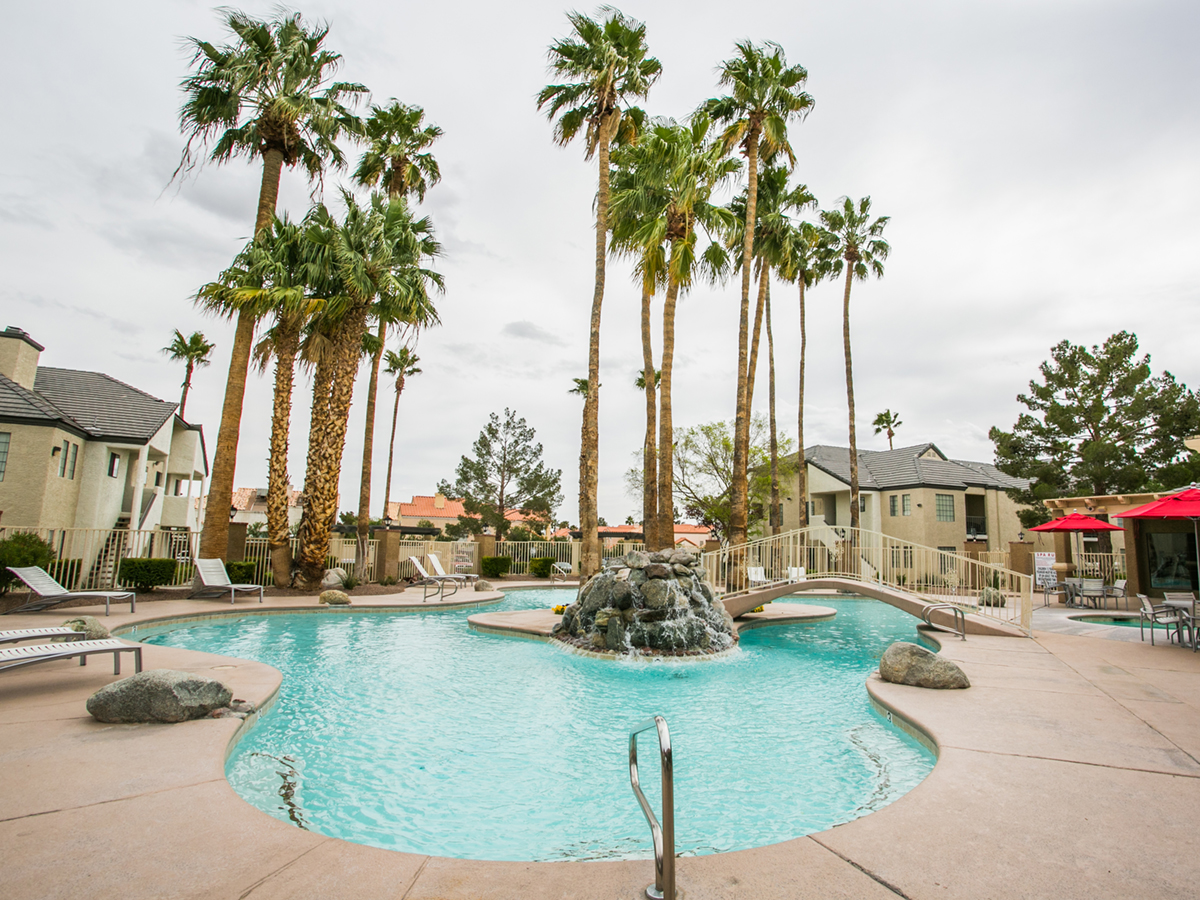 Oasis Vinings, acquired by TruAmerica in August and renamed Collage, will get an overhaul from the new ownership. Image courtesy of TruAmerica

Only three years after its debut, TruAmerica Multifamily has emerged as one of the industry’s fastest-growing investors. Through a bold acquisition program, the Los Angeles-based firm has built a $6.5 billion, 31,000-unit portfolio, primarily in the West. Among the metros where its footprint is expanding is Las Vegas.

All told, TruAmerica has invested about $200 million in the market since May 2015, buying five communities totaling 1,746 units. Its latest acquisition, completed in August for $83.5 million, or $104,115 per unit, consists of three low-density gated communities in northwestern Las Vegas.

In the off-market deal, TruAmerica acquired the 360-unit Oasis Gateway, built in 1998 and renamed Calypso; the 234-unit Oasis Vinings, completed in 1994 and now known as Collage; and the 1989-vintage, 208-unit Oasis Palms, which was rebranded Kaleidoscope. All offer such amenities as resort-style pools, fitness centers, clubhouses and barbecue areas.

The purchase was the firm’s third in the market, and more are on the way. “I could see us adding another two to three assets there,” said Greg Campbell, TruAmerica’s senior managing director of acquisitions and dispositions. “We’ve been happy with what we’ve been able to find, and we’re being a little more selective at this point, but we’d like to add more.”

Besides Nevada, the firm owns properties in California, Arizona, Utah, Colorado, Washington, Oregon and Maryland. TruAmerica invests mainly in Class B assets—so far, about 85 percent of its acquisitions have fallen into the Class B category, Campbell said.

Also preferred are communities with a minimum of 100 units and a transaction value of at least $25 million. The company adds value by
repositioning the properties, then identifies the opportune moment to sell.

“Sometimes we have partners that want to collect more cash flow, so we’ll hold it longer,” Campbell said. “But we are here to buy, reposition, sell and turn over most of our portfolio every five years or so.”

Some local multifamily market veterans believe that the investment firm’s interest bodes well for the Las Vegas market as a whole. 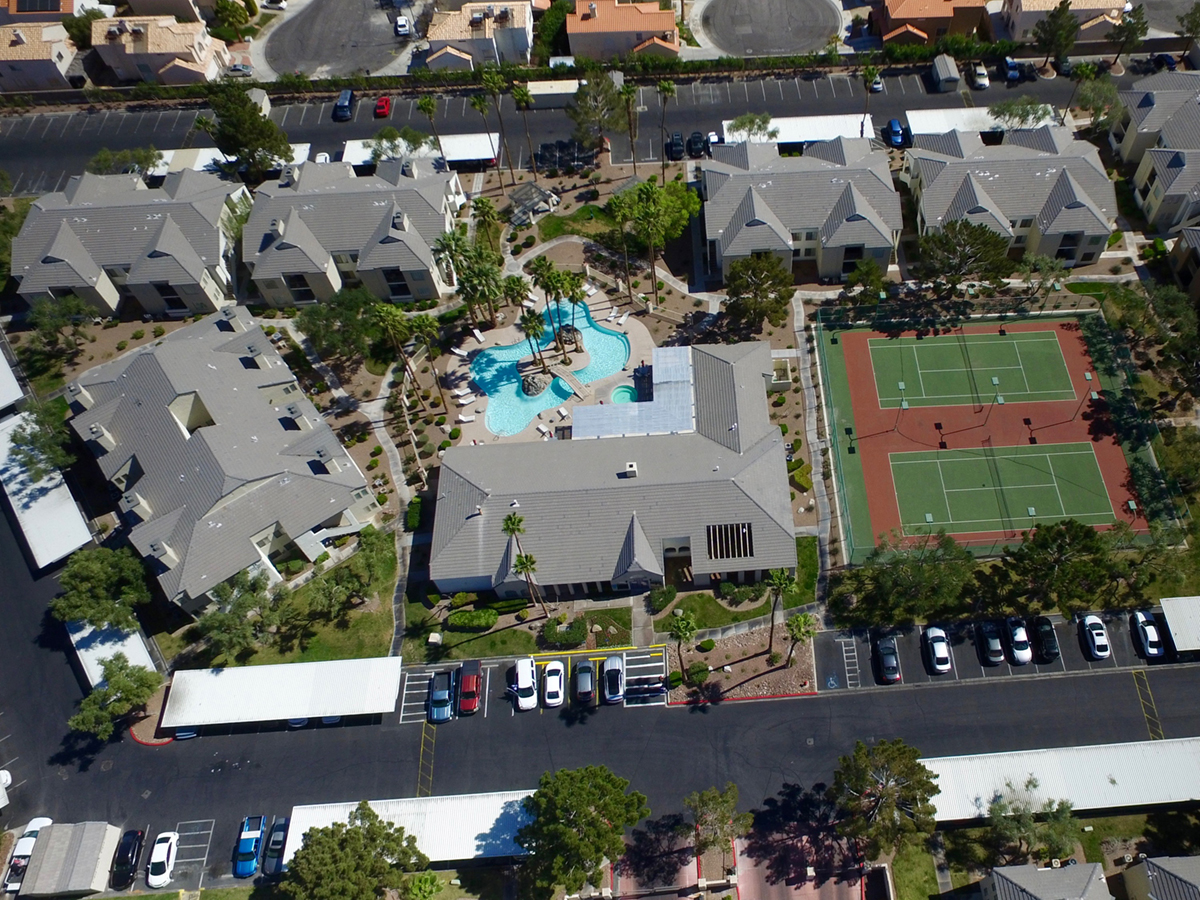 Kaleidoscope, a 208-unit community in northwestern Las Vegas recently acquired by TruAmerica Multifamily, was completed in 1989. It was previously known as Oasis Palms. Image courtesy of TruAmerica

“TruAmerica is a well-organized group, with deep pockets in terms of access to capital,” explained Douglas Schuster, executive managing director of ARA Newmark in Las Vegas. “The fact that they’re looking actively in Las Vegas says something good about what’s going on here—that we’re not just a sleepy little town in the desert.”

At its three newly acquired communities, TruAmerica plans to renovate exteriors and freshen amenities. It will also earmark $6,000 to $7,500 per unit for interior upgrades such as resurfacing kitchen cabinets, upgrading appliances and flooring, installing new baseboards and faux-wood blinds, and painting the interiors.

“(That amount) gets you a nice renovation in Las Vegas because labor costs are cheaper, and so are certain material costs,” said Campbell.

After repositioning the properties, Campbell hopes to raise rents. At Calypso, for example, in-place rents were $834, he said, but TruAmerica plans to bump them up 21.3 percent, to $1,012.

TruAmerica’s partner for the deal, MSD Capital, is a New York City-based firm established in 1998 to manage investments for  Dell Inc. founder Michael Dell and his family.

“In recent years, MSD Capital has sought to invest with prominent sponsors in older apartment complexes that offer compelling repositioning opportunities,” said Barry Sholem, head of the firm’s real estate investment group. “We continue to focus on markets with strong demand fundamentals and believe Las Vegas is still in the early stages of its post-recession recovery. This transaction checked all the boxes.”

The fundamentals of the Las Vegas multifamily market remain robust. Strong hiring is forecast to add some 28,500 jobs in 2016, according to Marcus & Millichap. Demand will drive vacancy down to 4.6 percent before the year is out, signaling the tightest market since the Great Recession. And prices are rising; the average monthly rent is expected to increase 7.5 percent to $890, the biggest jump on record.

Developers are responding to the demand for rental housing. Marcus & Millichap reported in a third-quarter report that nearly 2,600 new apartments were delivered in 2015, the most since 2010. This year, builders will complete 2,355 units, many of them in the high-rent southwest Las Vegas submarket.

But despite a steady stream of new inventory, Campbell said he’s not worried about oversupply. The communities coming online are primarily Class A, and TruAmerica gravitates toward vintage Class B product. Nor is he losing sleep over the notion that intensifying investor interest will drive up prices.

“We like the idea that for $104,000 a unit, we can buy pretty good quality,” he said. In Southern California, for example, assets comparable to Calypso, Collage and Kaleidoscope would fetch nearly $300,000 per unit. “We get a better going-in yield in Vegas, with cap rates in the mid-5 range,” Campbell noted.

Another favorite TruAmerica tactic is finding markets that present a significant dislocation between Class A and Class B rents. As Campbell explained: “That helps us determine that if we go in and spend money to upgrade the asset, there is opportunity to push rents but still a large enough gap between Class A (and Class B) that we never find ourselves competing for the same renters.”

Originally appearing in the December 2016 issue of MHN.