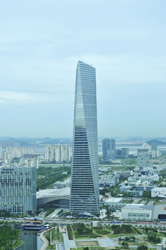 The NEAT Tower is located in Incheon’s $35 billion Songdo International Business District. Its 68 floors are home to a mix of offices, hotel rooms and an observatory. Floors two through 33 will be used by local or international businesses, with Daewoo International occupying floors nine through 21. The NEAT Tower will not be the location of the Korean trading company’s new headquarters.

Floors 36 and 37 will provide space for banquets, restaurants, meeting rooms and other such facilities. Meanwhile, a residence hotel will occupy floors 38 through 64. It will feature 423 guest rooms, as well as a penthouse on the top floor. The observatory will be located on the 65th floor and will have a full view of the surrounding business district. Amenities also include a three-story, underground parking garage.

According to The Real Deal, the total cost of the project was about $614 million. POSCO constructed the skyscraper using the highest level of security and anti-disaster measures. Global positioning system sensors were used to help ensure the real-time measurement of vibration, displacement or deformation caused by external factors. This made it possible to identify and prevent any issues that could have affected the building’s structural integrity.

Additionally, an anti-disaster control center is located on the first underground floor. It monitors the power supply, lighting, CCTV system, access control and other utility services. Floors 30 and 60 both have shelters able to safely accommodate all of the building’s occupants in case of an emergency, such as a fire. And the building’s 29 elevators can operate at speeds of 420 meters per minute, making the journey from the first to the 65th floor within one minute.

The NEAT Tower was designed by Kohn Pedersen Fox Associates. From one side, it appears to lean toward the Songdo Central Park. In fact, the building does bow by about 16 feet, but this effect is achieved without compromising the tower’s stability.

POSCO announced that it plans to seek LEED certification for the NEAT Tower, from the U.S. Green Building Council. The new skyscraper features a system that collects and treats part of the sewage for reuse in landscaping and in the tower’s toilet facilities. Also the developer used materials with a low content of volatile organic compounds in the building’s construction.