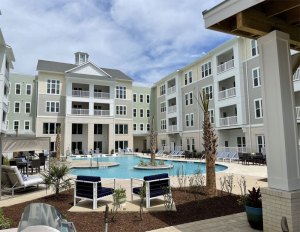 The co-developers started construction in 2019 and opened the community in April 2021. According to the developers, Inspire Coastal Grand was designed for empty nesters and seniors who wanted an active lifestyle but didn’t want to commit to homeownership.

The community offers one-, two- and three-bedroom units with in-unit washers and dryers and balconies. Amenities include a pool, a community garden, pickleball courts, walking trails, ponds, bocce courts and shade pavilions. The developers also built a central clubhouse that houses a demonstration kitchen, a social area, a multipurpose room, a theater, fitness and aerobic rooms, and arts and crafts rooms.

Located at 1749 Sea Pine Blvd., Inspire Coastal Grand is less than 3 miles away from Myrtle Beach and the area’s many restaurant and retail options. The community has access to the interchange between state routes 17 and 501, which connects residents to nearby cities Wilmington, N.C., and Charleston, S.C.

Over the years, HCP has been particularly active in Southeastern U.S. growth markets. The company primarily targeted multifamily investment opportunities in the region but has since expanded to developments of multifamily and other specialized properties in the past few years.

Working with Cape Fear Commercial again, HCP co-developed Hudson Renaissance, a 198-unit luxury apartment community in Wilmington, N.C. The firms are also co-developing a multifamily project in Surf City, N.C., that’s currently under construction. On its own, HCP has been working on The Hudson at Carolina Colours, a 240-unit apartment community in New Bern, N.C., after announcing plans in January 2021.