The project is part of the firm’s master-planned development, the Downtown Columbia Plan. 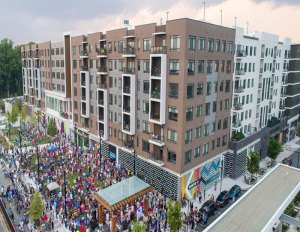 The Howard Hughes Corp. has secured financing for its 382-unit community that’s part of its ambitious master-planned development in Columbia, Md. JLL arranged the $117 million loan that will be used to take out existing construction financing for the developer’s community, Juniper. The five-year fixed-rate loan was provided by an undisclosed lender.

Located at 6000 Merriweather Drive, Juniper also offers 55,693 square feet of ground-level retail. The community is near The Mall in Columbia, which offers many retail and restaurant options. While Juniper is located a short drive from Howard Community College and Howard County General Hospital in Columbia, it’s also a short commute to both Baltimore and Washington, D.C.

The refinanced Juniper is part of the Downtown Columbia Plan, a master-planned development also being undertaken by The Howard Hughes Corp. At full build out, the plan will include three new and reconfigured neighborhoods, totaling 4.3 million square feet of new office space, 6,244 multifamily units, nearly 1.3 million square feet of retail and 640 hotel rooms.

In May, the company landed a $82.6 million construction loan to develop Marlow Apartments, also located in Columbia. The 472-unit community is also part of the developer’s Downtown Columbia Plan, more specifically the Merriweather District, which is one of the three neighborhoods in the master plan.