Resia sold the 420-unit mid-rise building after completing the residential project in June 2022. 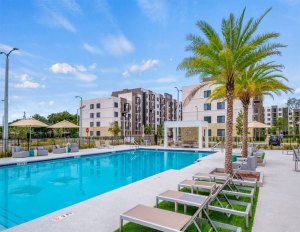 Harbor Group International LLC has made its eighth acquisition in the Miami-Dade area with the purchase of Oak Enclave Miami. The Virginia-based company acquired the 420-unit community from Resia for an undisclosed sales price. Cushman & Wakefield’s Robert Given and Troy Ballard brokered the sale, representing both the buyer and seller. As the new owner, HGI will assume the in-place loan on the community that was provided by Wells Fargo.

Located on a 14-acre site at 2301 NW 167th St., Oak Enclave Miami has nearby access to the city’s several highways, including the Palmetto Expressway, I-95 and the Florida Turnpike that connects residents to other major Miami-area cities like Aventura, Hollywood and Fort Lauderdale. In terms of public transportation, the community is also located near the Golden Glades Tri-Rail Station that provides a short commute to the area’s major employers with the Miami Health District and the Miami International Airport.

Richard Litton, president at HGI, said in prepared remarks that the Miami metro is still seeing strong in-migration as the company is seeing opportunities in submarkets like Miami Gardens.

Building up a major Miami portfolio

HGI’s Miami portfolio now totals nearly 2,000 units, but the company made acquisitions totaling more than 4,000 multifamily units across the U.S. in the second half of the year. Throughout the year, HGI has been investing in both commercial and multifamily properties, completing a total of $6.7 billion in transactions in both acquisitions and dispositions.