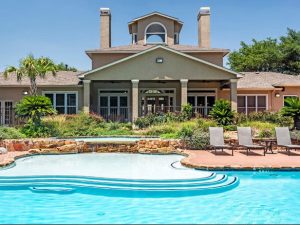 Built in 1997, the property features one- to three-bedroom floorplans ranging from 685 to 1,287 square feet, according to Yardi Matrix data. Community amenities include a pool, spa, fitness center, movie theater and dog park. Covered parking and barbecues are also available.

The asset last traded in 2015, when Hamilton Zanze bought the property for $33.4 million. During its six years of ownership, the company renovated the units with new flooring, appliances, hardware and paint, and also made improvements to the exterior and landscaping.

The community is located at 12727 Vista Del Norte, in the city’s Airport Area submarket. The intersection of interstates 410 and 10 is some 9 miles southwest of the property, while the San Antonio International Airport is within 4 miles southeast. A Walmart Supercenter store is less than a mile southwest of the property, while the Phil Hardberger Park is 1 mile northwest. Downtown San Antonio is some 12 miles south, via McAllister freeway.

Hamilton Zanze is active in other southern markets as well. In September, the company purchased Blu at Northline Apartments, a 377-unit property in Charlotte, N.C.