531 Myrtle features 29 residences, including studios and one- and two-bedroom units ranging from about 400 square feet to 895 square feet. 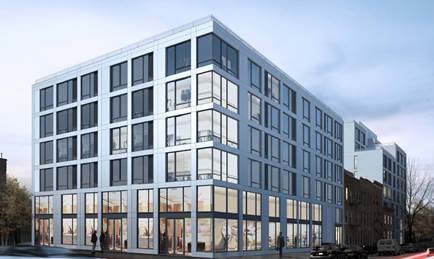 New York—Leasing has kicked off at 531 Myrtle, an apartment property on Myrtle Ave. in the Clinton Hill neighborhood of Brooklyn. 531 Myrtle is the first of two rental buildings known as Myrtle & Steuben, which are nearing completion by Greystone Development on the intersection of the same name.

531 Myrtle features 29 residences, including studios and one- and two-bedroom units ranging from about 400 square feet to 895 square feet, many include private outdoor space. Rents will start at $2,300. Common amenities include a fitness center, rooftop terrace with lounge and barbecue area, virtual doorman, bike storage, and washer and dryer in each unit.

The second phase of the development, Steuben, is around the corner at 100 Steuben St. and will launch leasing later this year. 100 Steuben will offer 43 residences consisting of studios to three-bedrooms ranging from about 460 square feet to 1,140 square feet, with rents also starting at $2,300. 100 Steuben’s amenities will be similar to those at 531 Myrtle.

AB Architekten designed the properties. The Myrtle façade combines concrete and metal panels with floor-to-ceiling double-glazed windows maximizing the light and air within each apartment. Residents will have access to views of Manhattan from the building’s fitness center.

Citi Habitats New Developments has been tapped as the building’s leasing agent. The property also includes 6,000 square feet of ground floor retail on Myrtle Ave, which already has two tenants, one of which is European Wax Center.

Clinton Hill is in the north-central part of the borough, bordered by the Brooklyn Navy Yard, Williamsburg, Bedford-Stuyvesant, and Prospect Heights. Apartment rents, which have plateaued for now in Brooklyn, are still growing in Clinton Hill. According to MNS’ most recent report on Brooklyn multifamily, in December 2016 rents in the neighborhood were up by an average of 2.4 percent compared with a year ago.