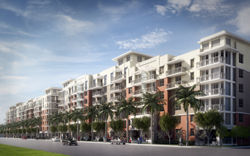 “Elan 16Forty will be minutes from the beach, Galleria shopping, Hollywood Park, the Las Olas district and downtown,” Gary Wallace, Greystar’s managing director of development, tells MHN. “It is the latest community we have developed under the Elan brand. Elan communities embody Greystar’s philosophy of developing stylish, high-quality apartment homes in distinctive locations.”

Elan 16Forty will offer a variety of one-, two- and three-bedroom floor plans ranging in size from 686 to 1,599 square feet of living space. Units will include stainless steel appliances, custom kitchen islands with European cabinetry, granite countertops with under mount sinks, pendant lighting, bamboo flooring in living areas, contemporary carpeting in bedrooms and ceramic tile in baths. Apartments will also feature 9 to 11-foot ceilings, spacious walk-in closets and large balconies.

Community amenities will include a 6,000-square-foot fitness center with cardio and strength equipment, a spin studio, juice bar and an aerobic room. A clubhouse will feature a gourmet kitchen, community room, an executive business center and a gaming room. There’s also a resort-style swimming pool, spa, sundeck with cabanas, outdoor grilling stations, a roof top terrace, a dog park, on-site storage and a parking garage.

“The location is fantastic and a great example of the distinctive locations we look for when developing our Elan communities—just a few blocks to Fort Lauderdale Beach and its bustling restaurant and shopping scene, as well as a short distance to downtown Fort Lauderdale’s Las Olas drive and central business district,” Wallace says. “The property also has easy access to the major freeways, making all of the surrounding South Florida metro’s accessible.”

According to Wallace, the area has a few luxury apartments that were delivered in the last cycle, about four years ago, but there’s been a pent-up demand for new, high-end luxury apartments.

“The population continues to grow in South Florida and now more than ever, renting is becoming a more appealing option than purchasing,” he says. “Our Elan communities are known for their thoughtful floor plans, stylish finishes and quality amenities.”

Construction is expected to be completed December 2014.