Three cities in Texas grew by a combined total of 2.8 million people from 2010 to 2019, according to a new report. 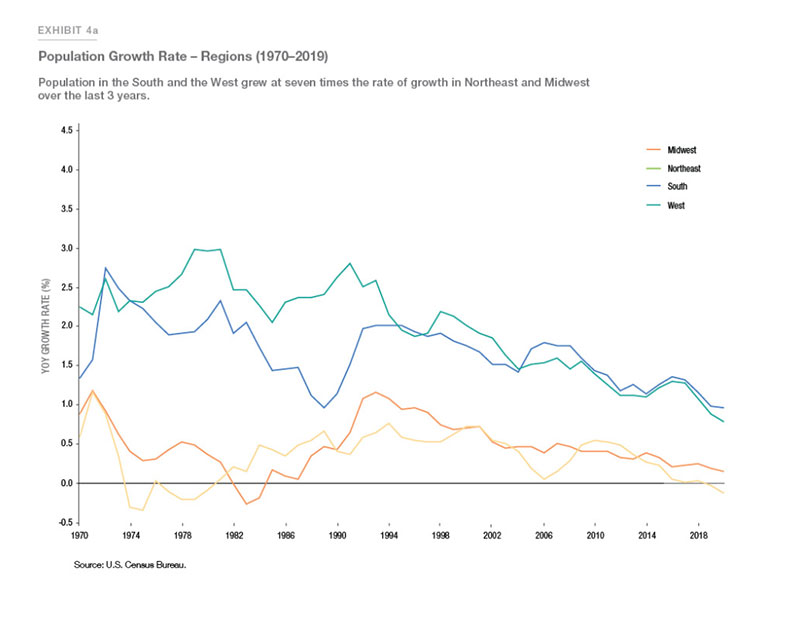 Metro areas in Texas and Florida saw the largest population increases in U.S. over the past decade, as growing economies, a lower cost of living and attractive weather drew an inflex of domestic and international migrants.

Within the Lone Star State, Dallas, Houston and Austin grew by a combined total of 2.8 million from 2010 to 2019, according to a new research report by Freddie Mac. Miami and Orlando, Fla., expanded by more than 1 million people during the same period.

Perhaps counterintuitively, these types of demographic changes do not seem to have a direct impact on housing prices. According to a regression analysis by the report, a 1 percent boost in population drives home prices up by only 0.03 percent. On the other hand, a 1 percent increase in per capita income leads to a 1.5 percent rise in housing prices, while increasing the per capital housing stock leads to a significant reduction in prices.

Other metro areas that made the top 10 list for absolute population growth included Phoenix, Atlanta, Washington, D.C., Seattle, and Denver. In the three-period from 2017 to 2019, Dallas, Phoenix and Houston topped the list.

Breaking down the numbers further, the report by the government-sponsored enterprise found that net migration tended to be the largest driver of population growth in the urban centers that had grown the most. High migration was especially evident in Orlando—where it drove 78 percent of the population growth in the past decade, divided equally between domestic and international arrivals—as well as Miami, Austin and Phoenix.

The South and West, by contrast, posted growth of 0.81 percent and 0.66 percent, respectively. Within the South, Texas, Florida and Georgia saw the largest additions of people, while Arizona, Washington and Nevada dominated growth in the West.

Migration accounted for the lion’s share of the population increase in the South. In the West, despite the inclusion of migration-heavy Phoenix, population growth tends to be driven by the fact that births outnumber deaths.

Freddie Mac also highlights a general movement of people from the cities and into the suburbs, which grew by annual rates of 0.3 percent and 0.7 percent, respectively, in 2019. It’s too early to tell whether an urban exodus that picked up during the pandemic will become a permanent trend, the report notes.

One long-term trend to watch has been a steady decline in overall domestic migration rates. The years 2018 to 2019 saw the lowest migration rate on record at 9.8 percent, while the share of movers aged 25 to 34 dropped from roughly 30 percent in 1970 to less than 20 percent in 2019.