The Reserve at Providence is a 574-unit garden-style community that includes a dog park, a picnic area and three pools. 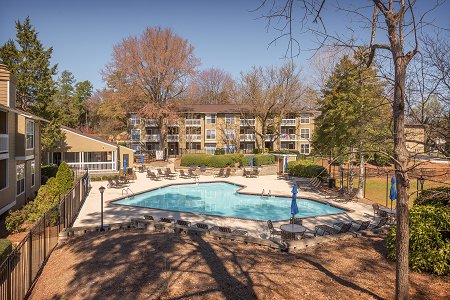 FCP has acquired the Reserve at Providence, a 574-unit, garden- and townhome-style apartment community in Charlotte, for $60.8 million. The buyer plans to treat the property, which was originally developed in 1980, as a value-add play.

Toward that end, FCP says it will build a new clubhouse and leasing center at the front of the property, and invest in capital improvements to the existing site, buildings and amenity areas. Common amenities include a clubhouse that is planned for redevelopment into a fitness and amenity center after a new clubhouse is built, a playground, a dog park, three pools, a picnic area with grills and a multi-sport court.

The property is the Maryland-based FCP’s fifth investment in the Charlotte area. The previous owner, a private California investor, paid $37.3 million for the property in 2015. The property used to be called Landmark at Lynden Square.

The fundamentals of the Charlotte economy have supported multifamily rental growth, new development and investor interest during most of the 2010s. According to Marcus & Millichap, a steady stream of employers relocating to and expanding in the region provides significant employment opportunities, thus drawing job seekers. During 2018, the metro’s population is expected to grow by about 62,000 residents, representing a growth rate three times the national pace.

In response, there’s been large influx of investors to the local apartment market, especially from the Northeast and California. “Many are exchange buyers lured by lower entry costs and a more robust yield potential than can be found in their home markets,” Marcus & Millichap’s latest report on the Charlotte market noted.