The first day of Expo Real in Munich revealed a number of challenges that major European cities are currently facing. Specifically, panelists at the City Development in Europe seminars discussed the housing challenge in the bustling cities of Stockholm, Amsterdam and London. 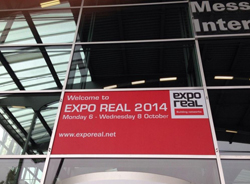 Munich—The first day of Expo Real in Munich revealed a number of challenges that major European cities are currently facing. Specifically, panelists at the City Development in Europe seminars discussed the housing challenge in the bustling cities of Stockholm, Amsterdam and London during one of the earliest talks to take place at the conference. According to the professionals representing the three cities, the major current issue would be managing growth and ensuring a housing stock that could reconcile the growing populations with the issues that new development projects usually bring to the table with existing residents.

With London having a projected population growth of around 25 percent during the following 25 years, the challenge is getting enough housing to a city that currently seems to lag behind in terms of new development. Richard Brown, associate director of Centre for London, noted that while the current pace of development sits at around 20,000 units per year, even conservative estimates place the required amount of housing at around 42,000 units each year.

Now, the municipality is even discussing taking chunks of space out of the city’s Green Belt, a circular tract of land around the UK capital designed during the mid-20th century to protect the neighboring areas of London from industrialization and excessive development. Therefore, the problem becomes whether the Green Belt concept has become obsolete for a city that is seeing growth at this kind of pace. Zoning concerns and the options of current residents are also part of the portfolio of issues that developers and legislators are currently seeing. According to Brown, roughly 600 different localities could be mapped out in London, and convincing each of those areas to add around 100 units would practically fix an impending housing crisis over the following decade. Other issues in the city are a current shortage of homebuilders and the fact that individuals currently dominate the city’s rental market.

The remedy that will be used by the local government to alter the perception of high-rise residential development in the city and to facilitate adding affordable housing as opposed to the dominant prime and super-prime real estate market of the city’s core is still unclear. The process might also include areas where large development can still take place such as the Royal Docks and the Olympic Park, but it will most likely prove to be a lengthy one during which rezoning measures and new legislation will be needed.