By Samantha Goldberg
May 23, 2017
NationalNews

U.S. manufacturing and other production-related indicators contributed to the CFNAI increase in April, according to the Chicago Fed, indicating that the economy is still in growth mode. 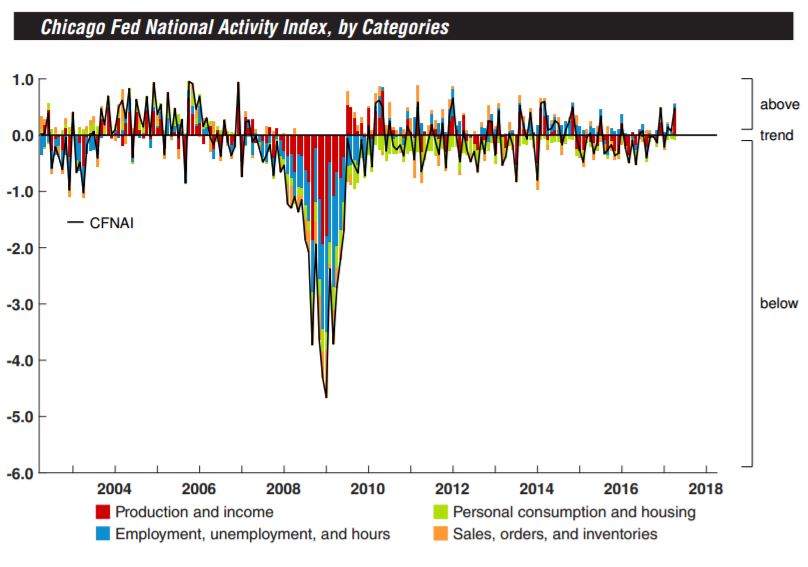 Led by improvements in production-related indicators—U.S. manufacturing, especially—the Chicago Fed National Activity Index (CFNAI) rose to +0.49 in April from +0.07 in March, according to the Chicago Fed on Monday. Two of the four broad categories of indicators that make up the index increased from March, and only one category (personal consumption and housing) made a negative contribution to the index in April.

The index is a weighted average of 85 indicators of growth in national economic activity drawn from four broad categories of data: production and income; employment, unemployment and hours; personal consumption and housing; and sales, orders and inventories. Zero means the economy is growing at historic norms, while negative points to slower growth and positive to higher growth.

The index’s three-month moving average, known as the CFNAI-MA3, increased to +0.23 in April from a neutral reading in March, reported the Chicago Fed, which also points to higher growth. In some ways, the three-month reading offers a clearer picture of direction of the economy, since it smooths out some of the gyrations of the monthly readings.