Transfer to Preserve is among several programs launched by Mayor Bill de Blasio’s administration to raise capital for repairs at the city’s NYCHA sites. 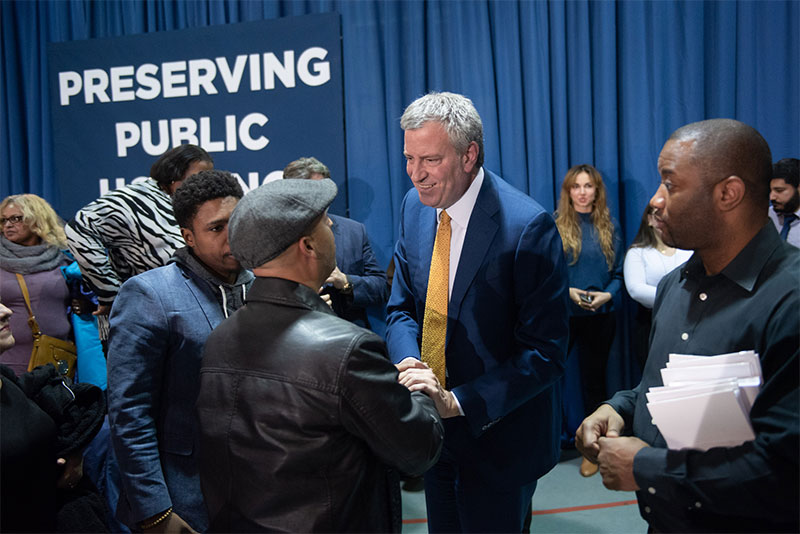 New York City will sell unused development air rights to raise as much as $1 billion to be used for capital repairs at adjacent public housing properties as part of NYCHA 2.0, a comprehensive, 10-year plan to make $24 billion in vital repairs needed at the city’s aging public housing sites.

“These are the kind of top-to-bottom renovations NYCHA residents have waited decades to see. they will make an enormous difference in the lives of the 400,000 New Yorkers who call NYCHA home and make up the backbone of our neighborhoods,” Mayor Bill de Blasio said in a prepared statement. “With new leadership, new resources and new programs, we are going to deliver the change NYCHA residents deserve.”

The 10-year plan will include complete renovations to apartments serving 175,000 residents, fund essential capital repairs across the rest of the NYCHA portfolio and launch new repair strategies to deal with problems related to lead paint, mold, elevators, heat, and vermin. It comes as the U.S. Department of Housing and Urban Development (HUD) threatens to take over NYCHA. HUD Secretary Ben Carson is expected to meet with de Blasio in New York City today about the plan.

“NYCHA is facing an existential crisis and the hundreds of thousands of New Yorkers who live in public housing need innovative solutions to big problems. I am happy to see we are getting creative and exploring all possibilities to make things happen for residents. They deserve better conditions and they deserve them now,” City Council President Corey Johnson said in prepared remarks.

Transfer to Preserve, which will allow NYCHA for the first time to tap into its extensive unused air rights and sell them to developers, is among three new programs launched by the de Blasio administration. Officials estimated that transferring even a portion of the approximately 80 million square feet of air rights could generate about $1 billion. The first deal is expected to be completed by mid-2019 at Ingersoll Houses in Fort Greene, Brooklyn, the borough’s largest NYCHA property with 1,840 units in 20 buildings.

The other new programs are Build to Preserve, which will deliver about $2 billion in capital repairs through new development on NYCHA land, and Fix to Preserve, which aims to rapidly address the five categories that affect residents’ daily lives the most, including replacing 405 elevators at 30 developments and replacing 297 of the lowest-performing boilers by 2026 and adding five mobile boilers by next year.

Build to Preserve and Transfer to Preserve, along with the Section 8 Conversion plan called PACT to Preserve announced in November, will provide funding to address about $16 billion in capital needs. The funding, combined with an expected $8 billion in federal, state and city capital funding, will enable the housing authority to work on the nearly $24 billion in repairs over the next 10 years. The programs expand on the Section 8 conversion plan that allows $12.8 billion in repairs to 62,000 units housing approximately 140,000 people to be made through public-private partnerships including the Rental Assistance Demonstration program. All 62,000 apartments will be converted to Section 8 funding with permanent affordability and will be maintained and operated by private developers.

Renovations have already begun at 1,395 apartments in the Ocean Bay (Bayside) complex in Queens and will soon begin at the Betances portfolio in the Mott Haven section of the Bronx. Earlier this month, Hunt Real Estate Capital said it had partnered with Fannie Mae to finance the acquisition and rehabilitation of more than 1,000 units of the Betances NYCHA RAD portfolio with a $120.6 million loan. The borrower is Betances RAD LLC and the portfolio has 39 buildings and one community center. Work will be done without displacing tenants over a 24-month period. Similar RAD conversions are underway at the 7,600-unit Twin Parks West houses, also in the Bronx, and are planned at NYCHA sites in Brooklyn and Manhattan.