Designing a six-story apartment building that fills an entire block of an existing—and fairly small—suburban downtown is an undertaking that demands the utmost in thoughtful consideration and planning.

Designing a six-story apartment building that fills an entire block of an existing—and fairly small—suburban downtown is an undertaking that demands the utmost in thoughtful consideration and planning. Play it too safe and the bland design will be lost; be too cutting edge and the development will be uncomfortably out of place. So how does a developer strike just the right balance and create a building with curb appeal that is vibrant yet timeless? That is exactly the question we at Morningside Group had to answer when designing Wheaton 121 in Wheaton, Ill.

Before I share how we moved forward, let me give you a little background: Wheaton is a well-established, historic suburb of Chicago located about 25 miles west of the city. The downtown, which has a varied fabric, is comprised of two-and three-story commercial brick buildings built before or around the turn of the century, is surrounded by farmhouse and Victorian style single-family homes and the Wheaton Center hi-rise towers from the late 1960s. The downtown is also home to the city’s Metra station and Wheaton College. Wheaton’s downtown is home to an eclectic mix of boutiques, restaurants, coffee shops and other thriving businesses, each with a distinct personality. Together they make up the character of Wheaton. 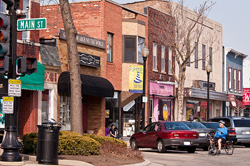 And so when we began the planning phase for Wheaton 121, it was that character—and more specifically the people of Wheaton—that we turned to for inspiration. We worked very closely with city officials to design a building that would reflect the values of this unique city. The result is a design that compliments its historic neighbors, puts focus on important architectural landmarks in the area, and also projects the vibrancy and forward-thinking attitude of Wheaton’s residents.

One of the most notable aspects of the design of Wheaton 121 is the two turreted towers that bookend the development. Those vertical elements were included to tie to the charming architecture of Wheaton’s courthouse clock tower and nearby churches. The towers also create a clear sightline between the center of downtown and Wheaton College, bringing the blocks together, rather than creating a barrier.

Another aspect of the design of Wheaton 121 that creates curb appeal by uniting the past and the future is the materials used for the building’s facade. We selected red brick and limestone—very traditional materials—yet incorporated subtle modern architectural details along with oversized windows, bold building signage and industrial-inspired metal work for the apartment balconies to bridge that transition from classic to future.

Lastly, yet perhaps most significant, are the elements that create curb appeal for pedestrians. The existing downtown had become a great environment in terms of walkability, and we wanted to promote that. Our site design includes corner plazas that will be home to specially commissioned sculptures from a local Midwestern artist. Those plazas are public space and will serve as a gateway between the public and residents of the development. Additionally, we were sensitive to the aesthetic perception of the pedestrian by hiding the parking garage on three sides with apartments with private, street-level entries. The fourth side of the garage is equally attractive for pedestrians by continuing the building’s stone facade and incorporating lush landscaping.

The result of these elements is a very dynamic exterior that offers visual interest to both Wheaton’s overall appearance as well as the streetscape. Wheaton 121 is a building created with curb appeal at the forefront of the plan and is a distinguished addition to downtown Wheaton thanks to this creative and thoughtful design.