The firms will break ground on the residential component of a master-planned development in January 2023. 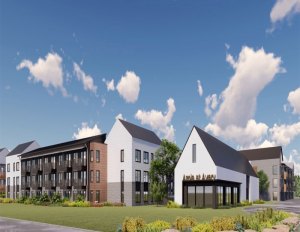 A joint venture has announced plans to construct a 359-unit apartment community that will slot into a larger master-planned development in Round Rock, Texas. The joint venture between CP Capital and ZOM Living is planning to break ground on Azola Avery Centre in January 2023.

The joint venture tapped JHP as the project’s architect, while Meshberg Group will serve as the interior designer and SEC Planning as the landscape architect. CP Capital and ZOM Living also tapped Pape-Dawson Engineers as the civil engineer and Rampart as the general contractor. Azola Avery Centre Is expected to open its first units in the second quarter of 2024. Once the community is fully completed in 2025, ZRS will handle the property management.

Located roughly 25 miles north of Austin, Texas, residents will have an easy commute to the area’s major tech employers like Dell, Apple, Samsung and Hewlett Packard.

Adding to the Avery Centre

Outside of the Austin metro, ZOM Living completed a 13-building multifamily project in Aubrey, Texas totaling 378 units in March. The developer is also working on more than 8,600 units that are either currently under construction or in the design and pre-development phases across the U.S. ZOM Living also recently established a senior housing division and has three active senior housing developments underway in Florida.