As master planner, the company will create new interiors and exteriors for the buildings at Farmville, Va.’s Longwood University, as well as oversee all matters of aesthetics, architecture and design. 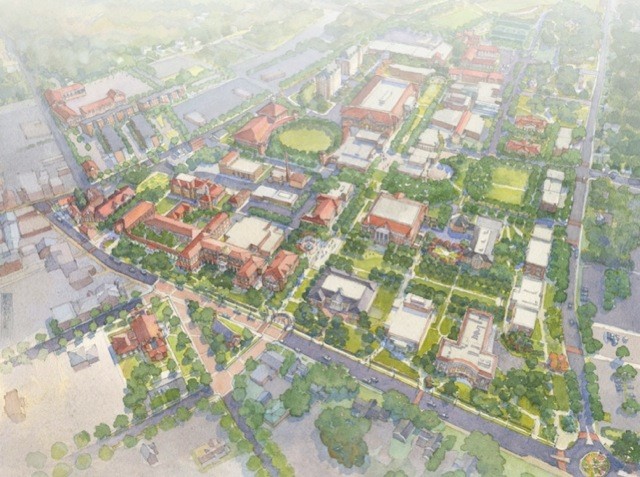 The two buildings are located on the east side of Longwood University’s central campus. Cooper Robertson, joined in the design team by VMDO, Little Diversified and Franck & Lohsen, will create new interiors and exteriors for both buildings. In addition to serving as the design architect for a new plaza, entry areas and streetscapes linking the two residence halls to campus and the community, Cooper Robertson as master planner will oversee all matters of aesthetics, architecture and design.

“As the two tallest buildings for miles around, the vision of making them into iconic beacons for the university became one of the main ideas brought out from the master plan. As a result, Longwood has elected to continue on with Cooper Robertson as the stewards of the master plan, to oversee the implementation of that vision.”

Responding to an anticipated 30 percent surge in the Longwood University student population over the next seven years, Cooper Robertson’s “Place Matters” master plan stresses a lively, pedestrian-friendly campus. That campus will feature settings for new programs, help meet the needs of the community encircling the college and set Farmville on a path to becoming one of the nation’s premier college communities.

“This project is one of the most significant undertakings for Longwood University since Curry and Frazier Halls were originally built,” Kirk reported.

“What’s fortunate with this renovation is that Longwood University and the designers’ vision are aligned. However, the largest challenges in any project are schedule and budget, and especially so for an university project, where the university calendar dictates and has a profound impact on the design and construction schedule. It’s critical that this project be designed, bid and built on time.”

To emphasize the historic charm of the campus and its link to downtown, the master plan’s first phase will center on the updating of the two nearly half-century-old residential structures. New facades will feature wider windows and more contextual brickwork. Interiors will be redesigned to allow for additional space and a greater number of student amenities. Significant site work and landscaping will also be included.

“Updating Curry Hall and Frazer Hall is a key step in the implementation of the master plan, and one the university identified as an early priority while we worked together to develop a long-range vision,” Kirk noted.