New research published by international real estate advisor Savills unveiled which top tier city is wallet-friendly and which is not for international students.

Boston—New research published by international real estate advisor Savills unveiled which top tier city is wallet-friendly and which not so much for international students.

Berlin was revealed to be the cheapest top tier city in the world for international students and Boston the most expensive.

An international student in the German capital can anticipate spending just over $1,000 per month on combined living, accommodation and tuition expenses, whereas their counterpart in Boston needs to budget at least five times as much at $5,446. U.S. cities hold the top three spots for most expensive destinations for students, with Boston followed by New York then San Francisco. London is the sixth most expensive city, with monthly costs just under $4,000. Bristol and Manchester placed eighth and ninth, respectively.

Savills’ World Student Housing report breaks down student costs into their constituent parts, exposing that across the 22 cities profiled accommodation costs and, most significantly, variations in tuition fees contribute to the affordability of a city. 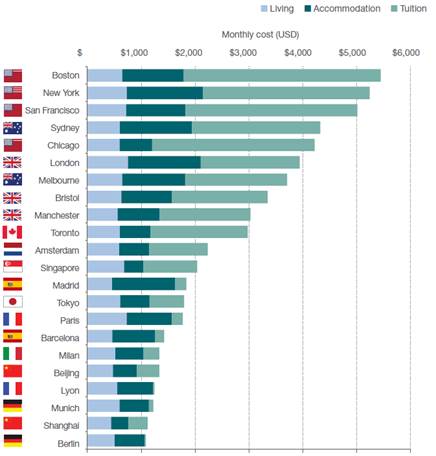 “While a student in a US institution can expect to pay between $3,100 and $3,700 per month in tuition, their counterpart in Germany will only pay between $20 and $30,” said Matthias Pink, director and head of research Germany at Savills.

In London, tuition fees comprise the highest proportion of costs, but the city can also claim the highest monthly living costs of the 22 cities at $754, followed by New York at $734 and Paris at $729.

The UK student housing market saw a record volume of investment in the first three quarters of 2015 at $6.5 billion, compared to just over $3 billion in the U.S. Huge expansion occurred in the last decade as the sector’s appeal to institutional investors has increased as a way of diversifying portfolios. Investment into other student housing markets such as The Netherlands, Germany and Australia also rose in recent years, although these markets are still in their early stages compared to the U.S. and U.K.

“According to our research, European universities have a clear advantage over other destinations if a student’s choice of location is predicated just on cost,” said Paul Tostevin, associate director of Savills World Research. “However, the reputation of an institution, the job prospects after graduation and the language in which a course is taught tend to play a greater part in the decision-making process, hence why we continue to see large proportions of students choosing to study in more traditional – albeit expensive – locations.”

Change may be on the horizon as a number of leading European institutions are planning to align themselves with the Bachelor degree system and teach more courses in English.

Marcus Roberts, director of student investment and development at Savills, added “This will broaden their appeal in the international marketplace and attract a significant increase in student numbers, making European cities, and those in The Netherlands and Germany in particular, strong potential growth areas for accommodation providers.”