CBRE Global Investors has boosted its Atlanta multifamily portfolio with the purchase of Alexander on Ponce, a 330-unit apartment complex in the city’s Midtown submarket, from Equity Residential. 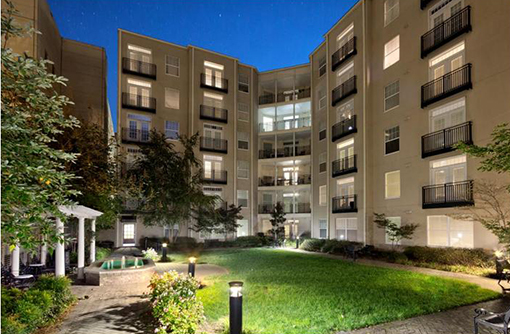 (This post was originally run in Commercial Property Executive.)

Atlanta—CBRE Global Investors has boosted its Atlanta multifamily portfolio with the purchase of Alexander on Ponce, a 330-unit apartment complex in the city’s Midtown submarket, from Equity Residential.

The sales price of the property at 144 Ponce De Leon Ave. NE was not released. The transaction was arranged by Jones Lang LaSalle’s Capital Markets group, which represented the seller. JLL managing directors Derrick Bloom and David Gutting lead the team.

The sale is part of Equity Residential’s plan to move out of several non-core markets announced in November 2012, when it teamed up with AvalonBay Communities to buy Archstone Inc. for $16 billion.

The purchase was made through CBRE Strategic Partners U.S. Value 6, a fund sponsored by CBRE Global Investors of Los Angeles. It is the second multi-family purchase in the Atlanta area for the fund, says Stephen Gullo, managing director and head of acquisitions for CBRE Global Investors Multi-Housing Group. Gullo says the fund, which also acquired an office property in Atlanta, has been fully placed. Multi-family housing accounted for between 35 and 40 percent of the fund’s investments, he tells Commercial Property Executive. CBRE Strategic Partners U.S. Value 6 closed in December 2012 with $1.1 billion in equity commitments and was expected to have purchasing power of up to $2.7 billion.

Gullo said the firm was planning to make “substantial renovations” to reposition the property, built in 2003, including upgrading common areas, amenities and unit interiors. He declined to give the amount to be spent on renovations or the purchase price but described it as a “significant discount to replacement costs” because land values have become so high in the area.

CBRE Global Investors was attracted to the Midtown property because it is within walking distance of the MARTA transit station, major employers, Piedmont Park, retailers, restaurants and entertainment venues, Gullo said.

“We see the area as already being desirable and stable with demand only going to grow with new employment coming and higher profile mixed developments, one of which is the Jamestown redevelopment of the former Sears, Roebuck and Co. distribution center,” Gullo adds.

Gutting of JLL described Alexander on Ponce as a “strong-performing asset.”

“Its rent increased six percent year-to-date in 2013 and has consistently delivered an occupancy rate of 95 percent,” Gutting adds.

Hit hard by the housing downturn and recession, Atlanta’s multi-family market is rebounding as jobs return to the city.

“Atlanta is attracting a wide range of employers, fostering strong job growth across all sectors, which will increase demand for apartments throughout the market,” Marcus & Millichap stated in its national Apartment Research Market Report for 2014.

The report for the Atlanta market noted that vacancy is expected to fall 10 basis points this year to 7.1 percent. In 2013, vacancy fell 40 basis points. Rents are projected to rise about 3.4 percent, slowing a bit from the 4.7 percent jump in 2013 due to the number of new units that are expected to be completed this year.

CBRE Global Investors, a global real estate investment management firm that is an independently operated affiliate of CBRE Group, Inc., has about $88.2 billion in assets under management. Through its various funds, CBRE Global Investors has been actively investing in multi-family properties throughout the United States. In December, one of its funds acquired 90 Degrees, a 337-unit apartment community in Phoenix. Two Houston apartment communities were purchased in the fourth quarter of 2013. In early October, the firm announced it had closed CBRE Wood Partners Development Fund 3, L.P. a multi-family development fund with equity commitments of more than $300 million.