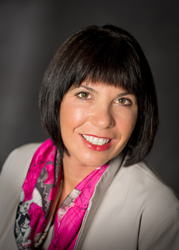 Christiana Foglio-Palmer’s success as an owner/developer of multifamily affordable housing in New Jersey could be measured by the typical parameters—numbers of units developed, residents housed, and dollars made. But sit down to talk with her about a 20-year career heading Community Investment Strategies Inc., (CIS) and you’ll hear more about hugs than profits and projects.“Yesterday I was at a site, in the elevator with a resident, and they gave me a hug. It is inexpressible how that makes me feel. I love building buildings, but I’ll take the hug any day,” she told me, her voice wracked with laryngitis. I had suggested we reschedule our interview, so she could save her voice.  She insisted that we go forward.

It’s that kind of dedication to doing her job that has made Foglio-Palmer stand out, not just as a developer who has built or redeveloped more than 3,000 units of low-to-moderate income housing around New Jersey, but as a strong female business owner who has made prioritizing female-headed households a cornerstone of her business.

“From where I sit, Chris Foglio is the smartest developer in the state,” said Christian Bollwage, mayor of Elizabeth, N.J., where CIS has developed several projects, including the Hope VI development. “She works with the residents more than anyone else.”

When Foglio-Palmer talks about her work, she doesn’t talk about projects so much as she does people. One particular resident, who lived at CIS’ very first redevelopment project, taught her a lesson that she’s incorporated in every project since.

The low-income condominiums were planned in collaboration with the current residents, and one of the final design decisions Foglio-Palmer needed to make was about a sign for the project. She described it to a meeting of community members—gold lettering, a nautical theme, spiffy and new—but was interrupted by a resident.

“She said, ‘If you put that sign, everything we’ve been working for, all these months, goes right out the window,” she recalls.  “When you ask my granddaughter where she lives, I want her to answer with an address. If you put up the sign, it’s just a new label. You’ll undo everything you have said to us that you wanted to do.’

“I walked over and I gave her a hug—because to me it was just a sign.” Foglio-Palmer recounts. Ever since, she and her team have worked with post offices in each city or town to make sure CIS’ housing developments get individual street addresses whenever possible. While some suburban communities might still need to have signs for ease of identification to emergency services personnel, that resident’s voice has stayed with her all these years.

“What I learned, and I think we all practice in my firm, is that you first go to listen,” she says. “It’s OK not to have the solution from the get go. The residents and the community have the solution. They may not have the tools to get it, and that’s what we do, but they already know what’s going to fix their community.”

A former colleague, Tracee Battis, says that Foglio-Palmer’s willingness to listen to residents is motivated by her kind heart.

“How the tenants live, and what programs they have, is very important to her. She puts their needs ahead of her profit, because the more community amenities she adds, the less her developer fee will be,” Battis says.

She finds creative ways to listen. When a property slated for redevelopment has a high number of female head-of-households, CIS will host evening meetings with a homework corner and pizza dinner for the kids, so that their mothers can attend, participate and not be distracted by their children.

“It’s that kind of stuff that makes us different. As women and mothers, those are the kinds of things that become our responsibility. We know what it feels like, so we try to make it a little easier,” says Foglio-Palmer.

In some cases, the housing-related efforts are more life changing. A current CIS project has several designated units for women escaping domestic violence, and the employees tasked with qualifying each project resident under federal assisted-housing standards have been touched by their gratitude and appreciation.

“My colleagues have told me that working with these particular women, coming out of an extreme situation, has all of the ajada (Ed.: Italian for bellyache or trouble), all of the problems that they have had while working on the qualifications, completely worthwhile,” Foglio-Palmer says. “It’s wonderful to see your staff members be touched by what they are doing every day.”

Foglio-Palmer grew up in New Jersey in an Italian family that she describes as “very open.” It was her father’s love of building things in the backyard that first piqued her interest in construction. He also worked for a company that built power plants, and blueprints from the project would make their way home with him. She learned to read them—and still remembers the distinct vinegary ink smell.

After attending Rutgers, where she studied economics and received a master’s degree in planning, Foglio-Palmer worked for the city of New Brunswick, N.J. as director of policy planning and was president of a New Brunswick non-profit that implemented $300 million in redevelopment projects. While still in her 30’s, Foglio-Palmer was appointed executive director of the New Jersey Housing & Mortgage Finance Agency (NJHMFA), and served there under two governors. She created the state’s housing policy and pushed forward innovative ways to develop affordable housing.

“She’s a tireless worker, very creative, and she made it a lot of fun although we were working very hard,” says Battis, who worked with Foglio-Palmer at New Jersey Housing. Now the director of a non-profit that provides housing for the disabled, Battis said she is still able to call her former boss for affordable housing advice.

Despite the background in urban planning and public service Foglio-Palmer is no politician. That designation in the family goes to her husband, Doug Palmer, a five-term mayor of Trenton, N.J. from 1990-2010. He was the first African-American to lead the city. The two have an 11-year-old daughter, who has been coming to work with her mom at CIS since she was a little girl.

Diversity and inclusion have always been important parts of Foglio–Palmer’s life and work, and her multiracial family makes her even more attuned to those issues. In her daughter, however, she sees a generational shift.

“Raising a biracial child today, I’ve noticed that the idea of color has melted away for her. It’s very cool to see she never really describes anybody by race. That’s not something that is part of her vernacular,” she says. She’s also raised a perceptive child, who observed (after many East Coast snow days spent at the CIS office this winter), that Take Your Daughter to Work Day was near.

“She said ‘I don’t think I’m going to come, because I’ve been here a lot lately,’” says her mother with a laugh. “I had to agree that no, it probably wouldn’t be particularly insightful for her.”

Creative approaches to multifamily living is essential, especially in a period of recovery for New Jersey as the state gets back on its feet after Hurricane Sandy.

“The state’s delay on coming out with the next tax credit funding round, and how they’re going to allocate Sandy dollars, has put all of the developers in a wait-and-see hold mode,” she says. For now, CIS’ focus has been to pursue projects that can be done without those types of financing.

Meanwhile, the firm has continued its work with cities that need creative ways to add affordable housing without sacrificing commercial and retail development. Foglio-Palmer and her team encourage them to get creative—even if it means rezoning.

“Smart municipalities are looking at nontraditional options for their neighborhoods, and looking at older properties and figuring out how they can be repositioned,” she says, pointing to examples of aging empty car dealerships or grocery store sites. If intended use isn’t possible and the property is stagnant after years of vacancy, it may be time to think outside the box.

She points to a project in Lawrence, N.J. as an example. The city hoped to build market-rate housing on a lot along the main thoroughfare, which had long been vacant. CIS presented a mixed-use alternative—affordable senior housing, above retail space on the ground floor.

“We were able to document, specifically with senior housing, that the number of local expenditures a senior makes, in downtown or the local economy, when aggregated is actually higher than what a market-rate renter would put into the local economy,” Foglio-Palmer says. A doctor’s office, fittingly, rented the entire ground floor of Heritage Village at Lawrence.

Looking toward the future, Foglio-Palmer hopes to develop more senior housing, and has one project in mind that would touch on her personal advocacy of diversity and acceptance.

“I really want to do a senior project that’s oriented to gay, lesbian and transgender individuals. They may not have the family structures that some of us have, who can step in and support them as they age,” she says. “As we look to the future, that may be a population that has been disenfranchised in the later and lonely stages of their lives.”