Commercial real estate investors must select carefully among the numerous sources of debt today. With traditional lending sources and many newcomers competing for business, will underwriting remain disciplined?

The commercial real estate lending market is as robust and competitive as it has ever been. Armed with lessons learned, traditional lenders are out in force. Meanwhile, there are newcomers that see debt investment as a safe haven in an otherwise uncertain economy. But since no one knows when the post-recession after-party will end, borrowers must exercise caution and next-level skills to evaluate the variety of options available today.

Despite a more disciplined approach, intense competition, the late-cycle economy, interest rate volatility and the looming risk of inflation, the volume of available funds is rising among the main sources of capital, with the exception of mezzanine lenders and mortgage REITs, according to Emerging Trends in Real Estate by the Urban Land Institute and PriceWaterhouseCoopers. As expected, loan-to-value and loan-to-cost levels are edging up. The alternative investors, meanwhile, are intensifying that competition and the amount of flexibility that borrowers can expect.

“Given competitiveness in the investment sales markets, many of those higher-leverage lenders are operators seeking to get capital out in lending since they cannot buy deals,” said Chris Moyer, managing director in Cushman & Wakefield’s Equity, Debt & Structured Finance Group. “We are also financing a number of construction loans at 80 percent-plus LTC.”

According to the Federal Reserve’s June update on mortgage debt outstanding, the total volume for the first quarter of 2019 was more than $15.5 trillion, a 3.6 percent year-over-year uptick. The largest part was held by depository institutions and life insurance companies ($5.52 trillion), followed by federal agencies ($5.48 trillion), mortgage pools or trusts ($3.16 trillion) and others ($1.37 trillion). All amounts have been trending upwards since 2015.

With prices for land, construction materials and labor increasing, more and more, developers have been turning to lenders for capital. Despite the amount of liquidity in the market, however, the fundamentals “need to make sense” in order for a deal to close, said Drew Fletcher, president of Greystone’s structure finance group.

Together with his team, Fletcher worked on behalf of Douglaston Development to obtain equity and construction debt for the company’s 931-unit luxury mixed-use residential development at 601 W. 29th St. in Manhattan. An affiliate of Ares Management LLC has committed to invest joint-venture equity into the project, while a syndicate of banks led by HSBC provided a $415 million construction loan.

The debt financing part turned out to be the most challenging one, he continued, more or less the norm when dealing with such high amounts. “Whenever you’re arranging a large, $150 million-plus syndicated bank loan, the challenge becomes finding enough like-minded lenders to round out the syndicate without diluting any of the economic terms to the borrower,” said Fletcher.

Show me the money

Of all the providers, the most prolific capital sources this year are expected to be alternative financial institutions (debt funds and other private concerns), mezzanine lenders and commercial banks, according to Emerging Trends in Real Estate.

“The most active segment of the capital markets today is transitional bridge lending for recently completed or nearly completed projects,” said Fletcher. “This type of financing is dominated by the non-bank lenders—debt funds.”

As a result, there has been a major compression in spreads and a relaxation of structure due to debt funds competing for the bridge slice of the debt stack.

The rise of fintech, which has both streamlined lending and paved the way for crowdfunders and other online platforms, has contributed to the exuberance and further tightened capital pricing.

“It’s easier for borrowers to increase proceeds because there usually is someone willing to lend on the incremental proceeds at some elevated cost of capital,” said Moyer. “Given competitiveness in the investment sales markets, many of those higher-leverage lenders are operators seeking to get capital out in lending since they cannot buy deals.”

Looser standards, however, are rare and have not (yet) impacted underwriting guidelines, which still follow the disciplined policies generated by the outcomes of the Great Recession.

“Overall, lender underwriting is more conservative, and despite stories at times about lenders becoming more aggressive or offering more interest-only, the underwriting itself is still sound,” said Moyer.

Respondents to the ULI-PwC survey—representatives of top real estate and financing organizations—foresee some easing in underwriting standards. For 2019, 25 percent of them expected looser underwriting compared to 17 percent in the 2018 outlook. At the same time, the percentage of those expecting more rigor dropped to 30 percent from 36 percent a year ago.

When it comes to risks for borrowers, industry experts unanimously agree upon one thing: interest rate volatility. The fluctuation, which stretched across the past 12 months, has led to the current inverted yield curve—the scarecrow of the real estate industry—after a dramatic drop over the past several weeks from values above the 3 percent threshold at the end of 2018.

“It is now 30 basis points less than the 30-day LIBOR,” Fletcher explained. “Historically, an inverted yield curve implies a looming recession. This creates uncertainty for both lenders and investors, but also opportunity for borrowers to lock in attractive long-term fixed rates for their assets.”

Moyer warns that even though this is a “borrower’s market,” playing the “interest rate guessing game” for too long can be dangerous.

“If the financing that is available is accretive to your underwriting and the terms match your business plan, the best thing to do is just get the financing closed,” he said. “The breadth of terms and number of lenders can freeze borrowers’ decision-making ability.”

While there are no major shifts on the horizon when it comes to the structure of the capital stack, the private lenders’ share of the market is anticipated to increase further. For the moment, the main thing to keep an eye on is how low lenders will be willing to price deals. 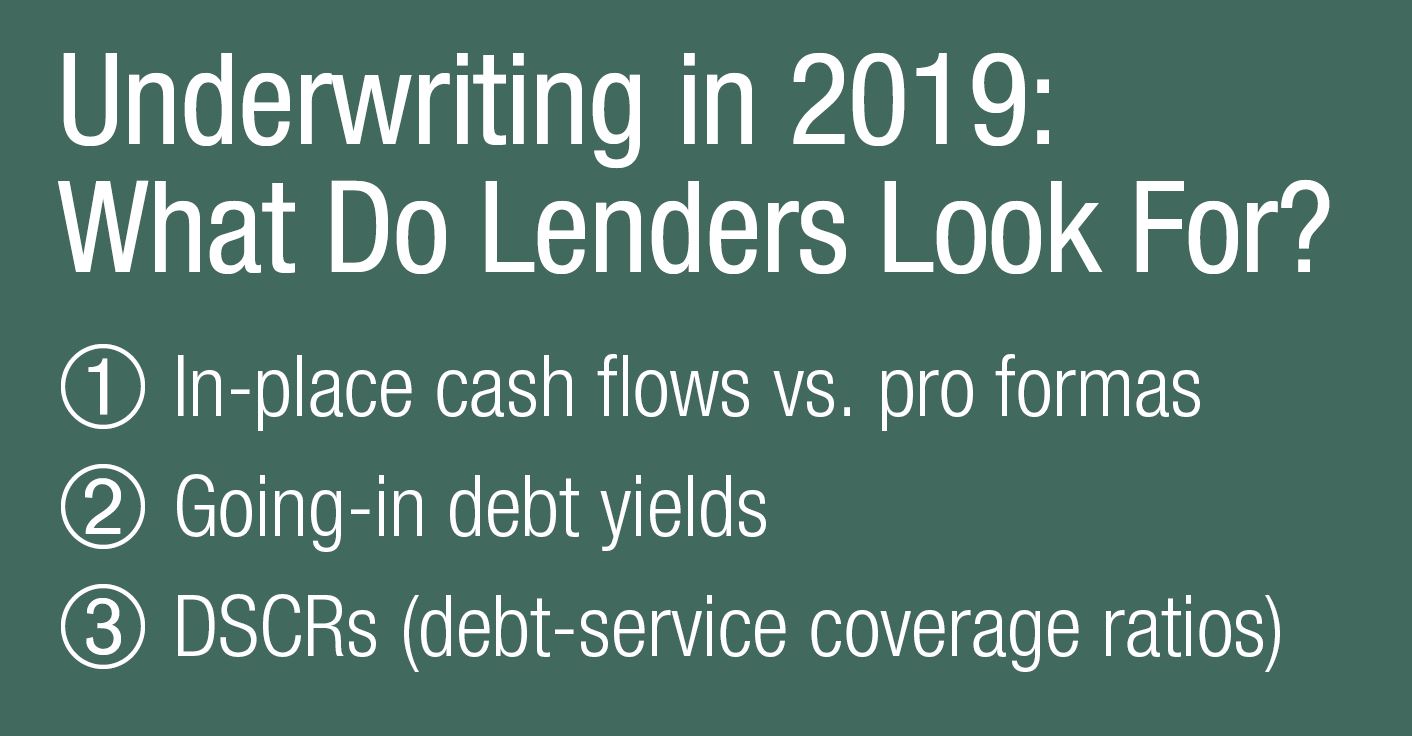 “Buyers are committing significant equity and have realistic low yield expectations, which translates into a more stable outlook. Pricing models will not collapse as they did in 2007, when a severe recession and over-leverage came together to ‘blow up’ overly aggressive pro formas,” explained Larry Braithwaite, senior vice president of portfolio management at ASB Real Estate Investments.

Concerns over the direction of interest rates may lead capital providers to try out a new approach. “With the recent drop-off in base rates (Ts, swaps, LIBOR), some lenders, like life companies and pension funds, that have minimum returns are starting to need to implement rate floors in the mid- to upper 3 percent (range). CMBS issuers will start to test the bond buyer threshold for 10-year yields, which could result in similar floors if rates remain low,” Moyer said.

According to Braithwaite, the level of delinquencies could also be a potential threat to future financing calm. “Keep an eye on delinquency and default ‘canary in the coal mine’-type of activity that will tick up and potentially catalyze a correction,” he concluded.

You’ll find more on this topic in the CPE-MHN Guide to Investing 2019.