According to a Yardi Matrix survey of 127 markets, this spike represents a 3.1 percent year-over-year increase, up 10 basis points from July. 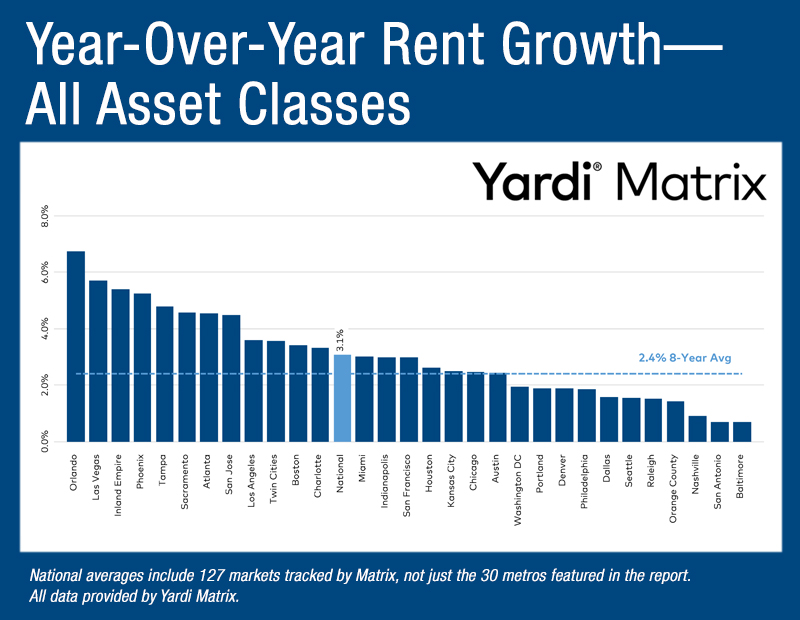 Multifamily rents for the year have hit a record high for the seventh consecutive month, up $2 to $1,412 in August. This marks an increase of 3.1 percent year-over-year, up 10 basis points from July. According to a Yardi Matrix survey of 127 markets, growth continues to be strongest in metros in the South and West, which are among the top nine best performers.

Much like last month, Orlando once again leads the top 30 metros in year-over-year growth, this month increasing 6.7 percent. Next is Las Vegas, up 5.7 percent, followed by the Inland Empire (5.4 percent), Phoenix (5.3 percent) and Tampa (4.8 percent). These rent increases continue to result from growth in supply and jobs. The 10 metros with the highest rent growth also saw employment growth (2.6 percent) exceed the rise in deliveries (1.8%) over the past year.

This month’s performance remains steady by rising occupancy rates and robust -supply growth. Since January, occupancy has increased 25 basis points for stabilized properties, with 2018 being on pace for a third consecutive year with 300,000 units in the pipeline. The national level of rent growth has hit another high since peaking in January 2017, while rents have risen steadily since their 2.2 percent low in September 2017.