The community will include units reserved for individuals with intellectual and developmental disabilities. 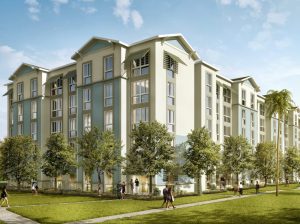 A public-private partnership between the Dania Beach Housing Authority and Atlantic Pacific Communities has broken ground on the 75-unit third phase of the affordable Saratoga Crossings in Dania Beach, Fla. The project is expected to deliver in early 2023.

Located at 840-850 W. Dania Beach Blvd., across the street from Saratoga Crossings I and II, which feature 172 units completed in 2019, the development is roughly 2 miles south of Fort Lauderdale International Airport and some 3 miles northwest of the Anne Kolb Nature Center. Oakwood Plaza is 1 mile southwest of the property, while Dania Beach is 3 miles east.

The five-story community will have one-bedroom units. Amenities will include a common area, on-site laundry, mailroom, elevators, as well as parking. The property will be reserved for those making 80 percent or less of the area median income.

The Saratoga Crossings III site currently houses an outdated residential building and a separate office building. The residential building now includes 12 one-bedroom units funded through HUD’s Project Based Rental Assistance program and are occupied by 24 adults with intellectual and developmental disabilities. The developers will use HUD’s program to temporarily relocate 12 of the tenants during construction. They will move back once the development is complete, this time each with their own separate one-bedroom/one-bathroom unit. DBHA will relocate the rest of the tenants with HCV, having the choice to return once the development is complete, or use their vouchers elsewhere. The project will also bring 15 Project Based Vouchers for seniors, issued by the DBHA.