Web Feature: Where and Why Are Prospects Looking for Apartments?

New York--A big factor in the success of a multifamily management or owning company is figuring out the answer to a basic question: where and why prospects are shopping for apartments. 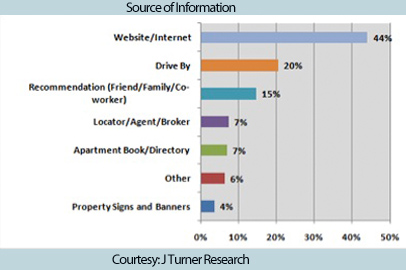 New York–A big factor in the success of a multifamily management or owning company is figuring out the answer to a basic question: where and why prospects are shopping for apartments. With this knowledge, a manager or an owner can fix small issues such as not getting enough web or foot traffic for a property, and ultimately, the vacancy problem that has been a priority for the industry over the last couple of years.

New technology is mostly good news for the sector; it’s convenient, provides multiple platforms to both apartment seekers and providers, and casts a wider net for properties to capture prospects. The not-so-good-news is that, without the presence of a distinguishable feature, a property could get lost on the web. Not to mention the fact that many owners and managers are still not as tech savvy—thereby losing out to their competitors. The biggest challenge for companies is keeping up with changes in technology and consumer behavior—the increasing role of mobile phones and social media to name a few.

“We are in a period of very rapid transition in terms of how prospective renters are finding their way to new apartments,” Mark Moran, vice president of marketing and business development at MyNewPlace, tells MHN. “Old media is clearly becoming less and less relevant, as demonstrated by all sorts of different measures. In the online world, search will continue to dominate into the near future and beyond.

“Mobile is coming on strong. I think within mobile, it’s still a browsing and search paradigm, as opposed to an application paradigm [iPhone or Android applications]. Social media isn’t yet much of a factor in our industry. However, most indicators suggest it is an unstoppable tsumani on the horizon.” 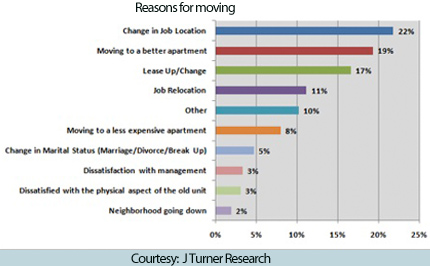 According to a recent Morgan Stanley study on Internet trends, the number of mobile Internet users will exceed the number of desktop Internet users within the next five years. “Based on the users of our website, mobile is growing three times faster than desktop web use. What’s interesting is that sessions are as long or longer on mobile devices as they are on computers,” says Moran.

When it comes to social media, MyNewPlace does its own research, a ton of advertising and testing across all major websites starting with Facebook. The company also subscribes to third-party research tools. “What I am seeing hit-wise is that traffic generating prospective renters from social media is less than 5 percent of all visits to our category from Facebook to Twitter. This number has been steady in the last few months, so right now, despite the buzz, it’s really not a factor in the industry,” he says.

The company also looks at tools and the number of searches involving the word rating. Moran finds that the amount of interest around user reviews and ratings is growing every month. “With Yelp and other folks coming into the space, it’s inevitable that ratings will be a major part of how consumers shop for apartments, really within the next couple of years,” he adds. 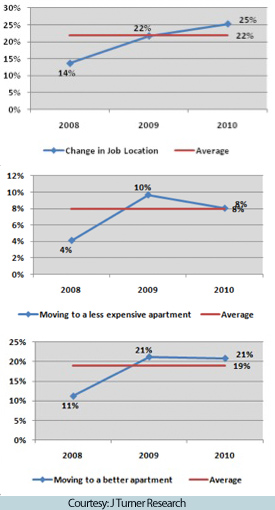 People using applications on their smartphones form a parallel universe to those using desktop Internet. “It’s truly additive,” says Moran. What’s interesting is that growth in web is 3 times the growth in PC traffic. The importance of mobile applications is growing, but the numbers are still not as high as mobile browsing. “This makes intuitive sense because people look for a new place to live in a limited period of time. My sense of applications is that they’re used mostly for things you want to do repetitively, over a longer period of time—like check Facebook and play games,” explains Moran.

This seems consistent with what MyNewPlace noted for its site. Only about 10 percent of the site’s traffic comes from mobile phones and less than 5 percent comes from social media.

While social media isn’t quite a factor yet, a recent Institute of Real Estate Management leadership survey found that 75 percent respondents had seen an increase in the use of social media to better manage their properties and promote their companies over the last 12 months. About 86 percent expected an increase in social media usage as a management tool in the next 12 months, especially in the multifamily sector where everything moves more quickly. One typical response was that residents are demanding that property managers get online because of the ease of access that comes with social media and smart phones.