The ranking showcases the five markets with the largest number of multifamily units that have broken ground in 2020.

In Part 2 of our list of the top markets for multifamily construction, we identify the top five entries in that ranking.

Our findings showed that only four of the top 10 markets saw their rental pipelines outnumber last year’s totals during the same period: Phoenix, North Dallas, Fort Worth and Urban Atlanta, in descending order. The other six markets, while among those with the highest number of apartments to break ground in the first five months of the year, had fewer new units underway compared to the same interval in 2019. These markets cover the first five positions of the ranking: 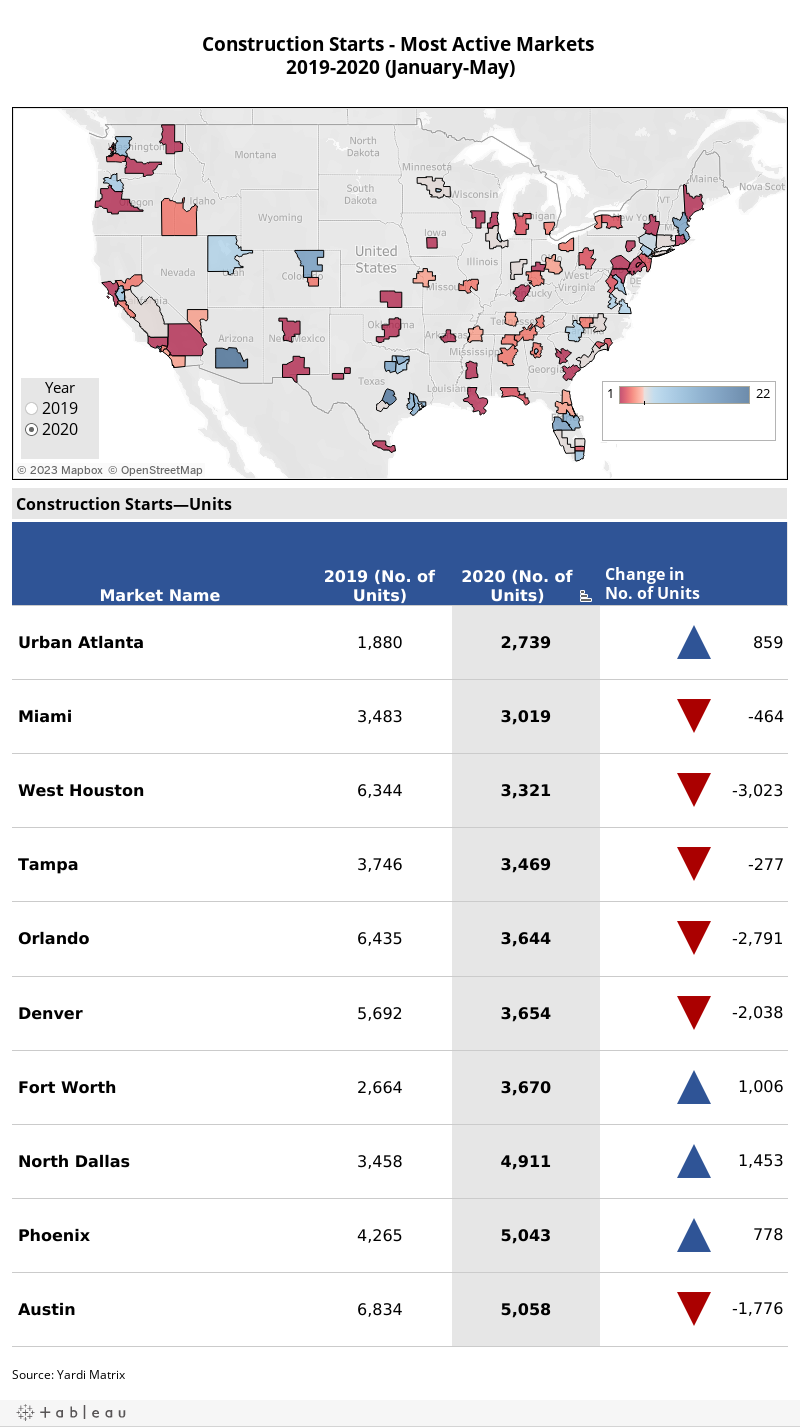 Denver’s multifamily market, pressured by its long-running demographic and economic expansion, remained active through the coronavirus shutdown, as construction was designated an essential service by local officials. In June, the metro counted more than 21,000 units in 104 properties underway, roughly 11,000 of which were slated for completion in 2020.

Between January and May, developers broke ground on 3,654 units in 16 projects, considerably lower than during the same interval last year. Specifically, multifamily development between January and May 2019 totaled 5,692 units in 30 properties. This drop in stock expansion can be attributed not only to the health crisis but also to the energy sector, which, at the start of the year, marked one of the steepest contractions ever due to the global oil conflict.

READ ALSO: Building in the Time of COVID-19

In the CBD/Five Points/North Capitol Hill submarket, development activity intensified the most in 2020, totaling 1,037 units in four new projects underway. The area also had the largest development underway, the 403-unit DriveTrain. Carmel Partners’ community is located at 3299 Brighton Blvd. and is being developed with the aid of a $97 million construction loan issued by the Massachusetts Mutual Life Insurance Co. that is set to mature in April 2030.

Construction remained elevated in Fort Worth—in June, the pipeline counted more than 11,600 units in 44 properties underway. Nearly half of these have a delivery date set for year’s end.

Between January and May 2020, developers broke ground on 3,670 units in 14 assets, 1,000 units more than the number of apartments that had started construction during the same period in 2019. Keller/Westlake was particularly attractive, counting 902 units in three new communities under construction. Integrated Real Estate Group was one of the most active developers in the market, starting development on 504 units so far in 2020.

One of Fort Worth’s notable projects of 2020 is The Mark at Weatherford, a 355-unit community located at 238 College Park Drive. Owned by CPG Development, the 12-building asset will deliver its first units in summer 2021 and will be completed in winter 2021.

In the first five months of 2020, some 4,900 units in 14 properties broke ground in North Dallas, nearly 1,500 units more than during the same period last year. Although this year’s number is higher, and despite construction being deemed essential in Texas during the health crisis, the number of new buildings has slowed amid COVID-19, as 11 of these new projects broke ground in January and February.

Aura at the Realm, a 421-unit property under construction at 3964 State Highway 121, marked one of the region’s largest projects to break ground in 2020. The Trinsic Residential Group asset has a $55 million construction loan attached to it, originated by the UMB Bank. The mixed-use asset includes 35,000 square feet of retail space and is slated for completion at the end of 2021.

Another metro that posted exceptional performance in recent years, Phoenix marked record apartment deliveries in 2019. As one of the preferred cities for Californians looking to relocate, Phoenix’s population rose 1.9 percent, well above the 0.3 percent national average. As such, demand for housing remained robust going into 2020. In June, more than 20,000 units were under construction in 87 properties.

With construction deemed essential from the early stages of the outbreak, groundbreaking of new developments continued nearly unfazed—some 5,000 units in 22 assets broke ground between January and May, nearly 800 units more than during the same period last year. With 2,125 units in eight properties underway, Sky Harbor had the most units that began construction this year. Overall, by the end of the year, more than 8,000 units in 36 properties are slated for delivery.

One of the largest multifamily developments that broke ground this year in the metro is the 552-unit San Artes. Located at 17900 N. Hayden Road in Scottsdale, this Mark-Taylor asset is being built with the help of a $110 million construction loan issued by Wells Fargo & Co. and is slated for completion in 2022.

In June, Austin had more than 26,000 units in 106 projects underway. Of these, more than 5,000 units in 21 properties broke ground between January and May of 2020. Even though the number of units dropped by nearly 1,800 relative to the same time last year, the Capital City has one of the fastest-growing populations in the country; the resulting elevated demand for housing helped the state capital secure the No. 1 position on our list.

Following the COVID-19 outbreak, a short period of unclear guidelines shaded Austin’s construction industry. This was apparent in the progressively declining number of groundbreakings—from five projects per month in January and February, new project starts dropped to four in March and April, and to three in May. However, construction was eventually deemed an essential service and both commercial and residential projects resumed activity.

Of the projects that broke ground this year, East Central Austin had the most apartments underway—544 units in three communities—followed by the University of Texas submarket with 473 units in two properties. Overall, by the end of the year, more than 17,000 units are slated for completion, but considering COVID-19’s impact on the sector, delays are likely to push delivery dates well into 2021.

One notable project underway was Double Creek in South Austin’s Sunset Valley submarket at 600 West Farm to Market 1626, near Old San Antonio Road. The 12-building, 372-unit property is owned by Dallas-based Stillwater Capital in partnership with Dubai-based Sweid & Sweid, and is being built with the aid of a $35 million construction loan originated by Prosperity Bank, due in October 2022. The first apartments are scheduled for completion in spring 2021, with the entire project expected to be completed by the summer of 2021.

Yardi Matrix covers all multifamily properties of 50-plus units across 133 markets in the United States. This ranking reflects projects underway within that sample group.