The metro's slow-but-steady economic growth is reflected in an insignificant rise in apartment rents and tepid housing demand, with public authorities making up nearly half of the biggest owners.

Once the center of the American steel industry, Pittsburgh is now home to a large number of companies from the health-care, education, finance, tourism and technology sectors. The metro area is on its way of successfully transitioning from a manufacturing-dominant city to a more diverse, multi-industry economy.

Although the housing sector wasn’t hit by the most recent recession as hard as other metros were, Pittsburgh’s population continues to dwindle. The reduced number of multifamily developments in the pipeline stands as a testimony to that dynamic. Development is concentrated in Allegheny County, but rents remain low compared to other metros, especially in the suburbs, where demand has plateaued. According to the latest Yardi Matrix Pittsburgh report, 2017 saw the completion of approximately 1,500 units, while 2,000 units are expected to come online by the end of this year. 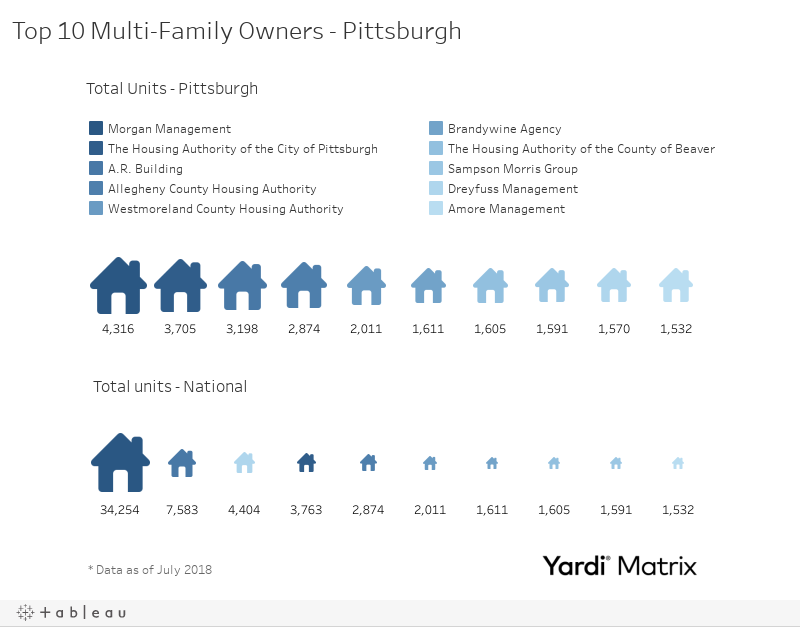 The Maryland-based firm’s Pittsburgh footprint includes three properties totaling 1,570 units. The two larger assets are located in the city’s Carnegie neighborhood, with the 953-unit Carriage Park leading the way. The community consists of 33 residential buildings. The other one is Crane Village, a 415-unit community situated at 651 Oaklynn Court, 3 miles from downtown and 15 miles from Pittsburgh International Airport.

Sampson Morris Group is another local investor who owns and manages seven properties accounting for 1,591 units in the Pittsburgh area. The firm’s most recent addition to its portfolio also happens to be the largest asset under its ownership. Situated at 3200 Chestnut Ridge Drive in Pittsburgh, the 468-unit Chestnut Ridge encompasses 31 buildings, and was completed in 1986. The community sits in a park-like setting, in the vicinity of major thoroughfares such as Route 30 and Lincoln Highway.

7. The Housing Authority of the County of Beaver

The government agency, which provides affordable housing for low- and moderate-income families and senior citizens, currently owns and operates 1,605 units across Beaver County. Most of its portfolio is located along the Beaver River, except from the 56-unit, 1952-built Midcrest Homes in Midland, Pa. The Housing Authority of the County of Beaver’s largest asset is Linmar Terrace, a fully affordable community located at 1 Tyler St. in Aliquippa, Pa., comprising 31 buildings and 158 units.

Brandywine Agency has been managing properties in Western Pennsylvania since 1958. Its current portfolio totals 1,611 units, with the largest community being Versailles Castle in North Versailles, Pa. The asset counts 199 units and sits on 13 acres at 1806 Greensburg Ave., in the vicinity of the Great Valley Mall and Super Walmart, as well as a vast number of mass transit options. Additionally, the company owns two fully affordable communities in North Versailles—Parkledge Arms and Cliffview Gardens.

The local government authority counts 2,011 units in its portfolio, all located in Westmoreland County. Its largest properties are part of the Greensburg, Pa., submarket, with the largest one being Hempfield Towers. The 202-unit senior living community was completed in 1980 and is located at 2500 S. Grande Blvd. in Greensburg.

Among the 2,874 units that Allegheny County Housing Authority owns and manages in the region is the 232-unit Homestead. The fully affordable, age-restricted community offers a mix of one- and two-bedroom units and was redeveloped under the Section 42 provisions. Situated at 411 E. 8th Ave. in Homestead, Pa., it is close to the Monongahela Riverbank, the Bost Building National Historic Landmark and The Waterfront shopping mall. Additionally, the government agency’s only non-fully affordable community is Meyers Ridge Townhomes. The 146-unit property sits at 901 Gray St. in McKees Rocks, Pa., and was completed in two phases in 1999 and 2004.

Third on our list, A.R. Building is a major apartment owner in various states, including Ohio, Indiana, Louisiana, Tennessee, Kentucky and Connecticut. The company owns 3,198 units in Pittsburgh only, a remarkable share of its 7,583-unit national portfolio. At 446 units, The Villages of Easton is the company’s largest community. The 1965-built property is located at 6000 Beatty Drive in Irwin, Pa., and encompasses 19 buildings on 29 acres. A.R. Building is also developing Kennedy Hybrids, an 80-unit community in McKees Rocks, Pa., slated for delivery at the end of 2018.

2. The Housing Authority of the City of Pittsburgh

After nearly three years of uncertainty, Steel City now boasts a new affordable housing fund. The four government authorities on this list stand as a testimony to that emerging trend. The Housing Authority of the City of Pittsburgh owns and manages 3,705 units in the area, with the largest asset being the 718-unit Oak Hill. The property is located at 3078 Terrace Street in Pittsburgh’s Hill District. Built in phases between 2001 and 2011, the partially affordable development comprises 64 buildings on a 70-acre site.

Holding the top position is New York-based Morgan Management. The private owner’s footprint counts more than 34,000 units across the nation, more than 4,300 of which are located in Pittsburgh. Their largest asset here is Maiden Bridge and Canongate, a 415-unit community located at 100 White Hampton Lane in Pittsburgh’s Whitehall neighborhood.

The property consists of two buildings completed in 1974 and 1979, on 30 acres. The unit mix consists of studios, one- and two-bedroom floorplans ranging between 630 and 1,484 square feet. Lifestyle amenities include heated swimming pool, fitness center, community center, library, as well as free shuttle to nearby shopping.