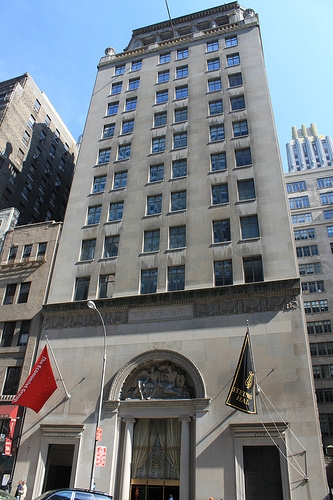 As part of this transaction, JDS Development Group, along with partner Property Markets Group, also recapitalized and consolidated their existing development parcel at 105-107 West 57th Street.

Steinway Hall was built in 1924 and has been either fully or partially occupied by Steinway & Sons, the famed piano maker, since it construction. The building, designed by architecture firm Warren & Wetmore, was designated and registered as a historic and cultural landmark in 2001. The façade of Steinway Hall features an impressive bas-relief of Apollo and a musical muse in the lunette above the grand window at street level. The main room of the building is a two-story rotunda with a domed ceiling that was hand painted by Paul Arndt.

The property is located between Sixth Avenue and Seventh Avenue, in the heart of Midtown Manhattan. This outstanding location affords future residents of the development access to many prime New York City attractions including Central Park, Columbus Circle, Rockefeller Center, Times Square and the Museum of Modern Art, in additional to numerous leading restaurants and global retail destinations.

“The acquisition financing provided the sponsorship with the necessary capital to create a truly extraordinary development assemblage. Meridian was able to vividly illustrate the sponsor’s vision for the property to the lender in a compelling way that allowed the loan to close in a one-week timeframe,”  Appel says. “Ultimately, JDS Development Group will restore Steinway Hall to its original grandeur and will construct a more than 900-foot tall tower next door. Given the creativity and ability of the sponsor, the new property is destined to become an iconic New York City skyscraper, building on the unique pedigree of Steinway Hall,” he adds. “The transaction was made possible by both a savvy lender and a brilliant developer working in concert to meet common goals.”

“The 57th Street corridor remains one of the most attractive locations for retail and residential development in the city. This is evidenced by the numerous development projects underway and the recent volume and velocity of property sales in the area,” Majeski says.

Additionally, in March 2013, Meridian arranged $128 million in acquisition financing on behalf of JDS Development Group for the company’s purchase of the 730,426 square foot development site located at 616 First Avenue, between East 35th Street and East 36th Street, in Manhattan.

Vistas at Hackberry was recently renovated in 2007 and is 95.5 percent leased. Amenities include a swimming pool, hot tub, fitness center, clubhouse and business center.

Indianapolis—The RADCO Companies has closed its third Midwestern acquisition in 90 days with the acquisition of Lakewood Lodge. The 454-unit asset is located in Northern Indianapolis and was picked up from the Lehman estate for $16.5 million.

“We believe in the Midwest and we are very familiar with the market,” says Norman Radow, company founder and CEO. “In Indianapolis in particular, we are seeing strong employment growth, and we are buying the property at an attractive going in basis. We expect to acquire additional properties in the Midwest over the coming months.”

Lakewood Lodge sits on 35 acres in the city’s primary perimeter road, just north of Broad Ripple Village, a popular entertainment district. RADCO plans to rebrand and reposition the property. The acquisition was financed through a mixture of bridge debt and private equity.