Many major markets on the West Coast are experiencing significant rent growth due to substantial in-migration.

The diversity of industry has led many markets in Northern California and the Pacific Northwest to experience a significant in-migration. The region’s reputation, particularly Portland and Seattle, for having an “entrepreneurial spirit” has certainly helped, says Steve Orser, vice president of development-Pacific Northwest at Wood Partners.

“What’s driving [Seattle and Portland] is what Richard Florida called the creative class,” says Orser. “Seattle and Portland rank high in terms of the number of college graduates—those that are then going to create the companies, the resources and the drivers for the next 20 years.

“We have been so underdeveloped in terms of the number of apartments that have been built in the last several years, given the downturn, and yet we’re still … attracting a significant in-migration,” he adds. “While [someone] may not have a current job, the prospects of their job plus their lifestyle that they’re going to enjoy … is going to lead them to move, potentially site unseen.”

Tech companies, such as Microsoft, have taken root in Seattle, and other industries, such as aerospace, particularly with Boeing, and biomedical, with ZymoGenetics, have been expanding. The unemployment rate in Seattle-Tacoma-Bellevue was 8.5 percent as of May, according to the Bureau of Labor Statistics.

Additionally, both natural and man-made boundaries have prohibited over-development in this region. “Growth in Seattle doesn’t just continue and grow out,” notes Orser. “That has led to a real interest in the urban area, and that’s fed by people’s interest in the vibrancy of a downtown and other smaller downtowns outside of Seattle.” 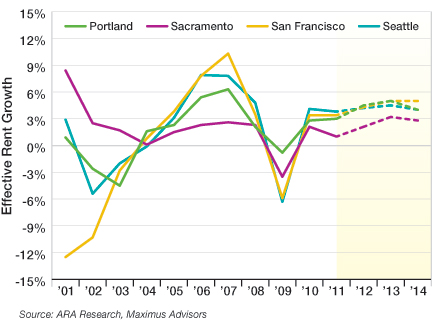 Portland, too, has an urban growth boundary that has limited sprawl, points out Gail Neuburg, principal in the Portland office of Apartment Realty Advisors (ARA). “Oregon in general has very strict land-use planning,” she notes. “It’s very difficult to change the use of land, it’s very difficult to find apartment land, and there’s an urban growth boundary around every municipality that limits availability of land—and our fees have skyrocketed, making cost to build prohibitive.”

The Portland-Vancouver-Hillsboro metro area reported its unemployment rate at 8.6 percent in May. Intel recently announced its $4 billion to $6 million investment in a new plant in Hillsboro. This is expected to bring 6,000 construction jobs, as well as 800 permanent positions.

Similar to the Pacific Northwest, the San Francisco Bay Area has a very diverse economy, and Silicon Valley, specifically, is heavily tech-focused. “Tech is a really major growth sector, and that market rebounded incredibly quickly out of the 2001 downturn; we are seeing a very similar response to this most recent downturn,” notes Kurt Zech, senior managing director, KW Multifamily Management Group, which owns and manages more than 5,000 units in the Bay Area.

Overall, the major markets in Northern California and the Pacific Northwest have seen rent growth above the national average. “Most investors are looking three to five years out, thinking the rental market, on the fundamental side, will be strong through this period,” notes Jeff Patterson, principal in ARA’s Irvine, Calif. office.

Portland’s median income, which is one of the lowest on the West Coast, may be putting some downward pressure on rents, notes Greg Frick, partner at Portland-based HFO Real Estate Investment; nonetheless, asking and effective rents continued to grow—2 percent and 2.3 percent in 2010, respectively, according to HFO’s Portland-Vancouver MSA Market Analysis. 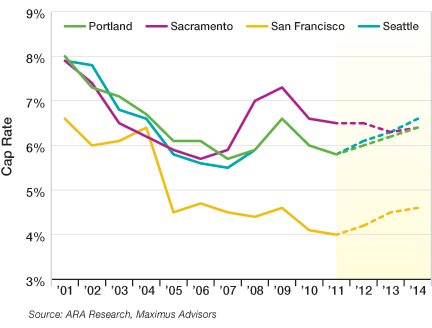 Only 660 units were added to the metro in 2010, and 2011 is slated to approve just 1,849 new permits in 2011 for multifamily starts, according to HFO’s Market Analysis. This is compared to an average of 5,000 new applications per year for the previous 10 years.

“We are still on the radar for the apartment renter aged 18 to 35,” points out Frick. “We are a place people want to be. With or without jobs they are still coming here, so that’s enabled existing owners to see some pretty good appreciation in rents.”

In Seattle, “rent appreciation is so much higher for those closer-in locations,” notes Orser of Wood Partners, which opened its Seattle office in late 2010. “Seattle, over the last six to nine months, has become a very strong and competitive marketplace, and those types of value-adds that everybody thought were there 12 months ago have quickly disappeared.”

Wood recently broke ground on a 91-unit apartment community in the northeast Seattle neighborhood of Wedgwood, which is slated for completion in the summer of 2012. The company is currently seeking development opportunities—urban infill and downtown—in both Seattle and Portland, mostly in the “smaller, tight-knit communities” of Bellevue, Redmond and Kirkland.

On the investment side, Portland has seen more deals transact in the last year than Seattle, reports Frick. “We are hearing from institutional buyers when they are coming here looking for product that they are not able to find stuff in Seattle,” he says. “You typically see more product changing in Seattle—and larger product. Portland doesn’t have much large inventory, but this year there’s been a lot of transactions.”

Frick has observed an abundance of institutional deals, of $15 million and up, in Portland, which he says started in the last half of 2010 and has continued into 2011. Consequently, the market has seen cap rates compress; in core, downtown locations, properties are trading sub-5, and more suburban assets are trading in the mid-5 percent cap-rate range. B and C Class assets are holding steady, he adds.

Seattle cap rates are in the high-5 to low-6 percent range, according to ARA’s research.

From a demographics perspective, the future looks bright for these Pacific Northwest markets. “We are on the destination list for that renter population segment, points out Frick. “We have people moving here without jobs. … The joke around here is young people come here to retire,” he adds.

While this bodes well for the future, these potential renters will, of course, need some income for owners to achieve increasing rents. And, Frick adds, wage inflation is a must. “We are really poised for huge rent increases, but we also need to see some wage inflation to really garner those; if incomes don’t go up [in Portland], there will be a cap for what you can charge for rent.”

“A lot of that has been fueled by Silicon Valley leading the way out of the recession for the Bay Area, and what’s happening in the capital markets relative to tech firms and [their] ability to raise capital, go public, etc., is fueling a lot of that job growth,” says Gladstein.

“The tech companies have been moving into the downtown San Francisco corridor,” Zech adds. “We think that will spread from the Valley north. … In the city of Petaluma, where we own a 500-unit property, we have seen an instance where there are a large number of commercial buildings transacting that were formerly distressed. New owners are coming in and underwriting lower commercial rents for the space, so they are getting new tenants, vacancies [are] dropping and more employment and jobs [are coming to] the area. That’s a great thing for apartment buildings.”

Leary adds that many of the tech companies normally incubate in the city and move to the South Bay or the Peninsula; now, however, wanting to attract talent from all over the world, many of them are staying in the city. In addition to the hiring by start-ups in San Francisco, many established high-tech companies in the South Bay and Peninsula are also hiring, which has contributed to significant rent growth in these markets. “There’s no vacancy of apartments in San Francisco, and San Francisco rents are jumping up significantly,” he notes.

Meanwhile, despite its relatively high unemployment rate—11.7 percent as of May 2011—Sacramento is also seeing an increase in rental rates, which Leary attributes to its status as an “affordable alternative in California.” Average effective rents in Sacramento are projected to be $891 for 2011, compared to $1,835 in San Francisco.

The investment market in San Francisco has been somewhat slow for the first part of 2011, but, Leary notes, the market is picking up. Cap rates for core, institutional, infill locations in San Francisco, the Peninsula and South Bay locations are in the low- to mid-4 percent range. East Bay, however, is seeing somewhat higher caps, between the high 4s and low 5s, he reports.

“Cap rates are being driven down so low due to the demand and lack of available product and the belief that the rent increases that we’re seeing are sustainable for the next couple of years,” says Leary. “Investors think that rents are going to continue to climb, and they are already climbing significantly.”

Kennedy Wilson recently acquired Bella Vista at Hilltop, a 1,008-unit multifamily community in San Pablo, for $140.5 million. According to Real Capital Analytics, the purchase represents the largest multifamily asset transaction by unit count in the United States thus far in 2011.

The San Francisco investment market first saw the return of public REITs, whose focus is traditionally A product in core locations, recalls Gladstein. Pension funds and other institutions followed, also focusing on these assets. At the time, about 18 months ago, rents had yet to move. Then, about one year ago, the value-add story came back into play as rents began to move.

“The value-add opportunities have come back in the markets,” Gladstein confirms. “We are seeing it both from owners, as well as some of the REITs who are selling B product in secondary and tertiary locations and moving into A product in core locations. The question today is, what’s motivating those sellers?”

Zech agrees. “As consumer demand and confidence improve people begin to be willing to pay a premium for upgraded units.”

“It really gets into the specifics of the submarkets, supply and most importantly, jobs,” points out Gladstein. “On average, in the better markets, most people are underwriting rent growth over the next year at anywhere from 6 percent to 10 percent.”

Similar to the Pacific Northwest markets, however, wage inflation is key. “Until we see true effective income growth, renters aren’t going to be willing and able to pay those higher rents. Income has to follow the rent growth in order to enable landlords to increase rents,” Zech points out.

Submarket-wise, the Peninsula, Silicon Valley and San Jose appear to have the most opportunity in terms of potential rent growth, notes Zech. “The challenge is that buyers are willing to pay a massive premium for properties in those markets because they are underwriting very large rent growth in the next five years. Properties are going well below 5 caps.”

Core A assets are trading in the mid-4 percent cap rate range, notes Gladstein, while B product is achieving between 5 percent and 6 percent caps.

As far as new development, some developers do have their eyes peeled for land-buying opportunities, but, as Zech points out that, because of the extensive entitlement process, “we don’t expect there to be any significant new supply to come online in the next three to five years in infill Bay Area locations.”

Gladstein is optimistic that the potential supply that the market sees coming won’t come close to meeting the demand.

The one thing those in Northern California must keep in mind is state budget issues. “Everybody is watching in concern with municipal budgets … and what’s playing out there,” notes Gladstein.