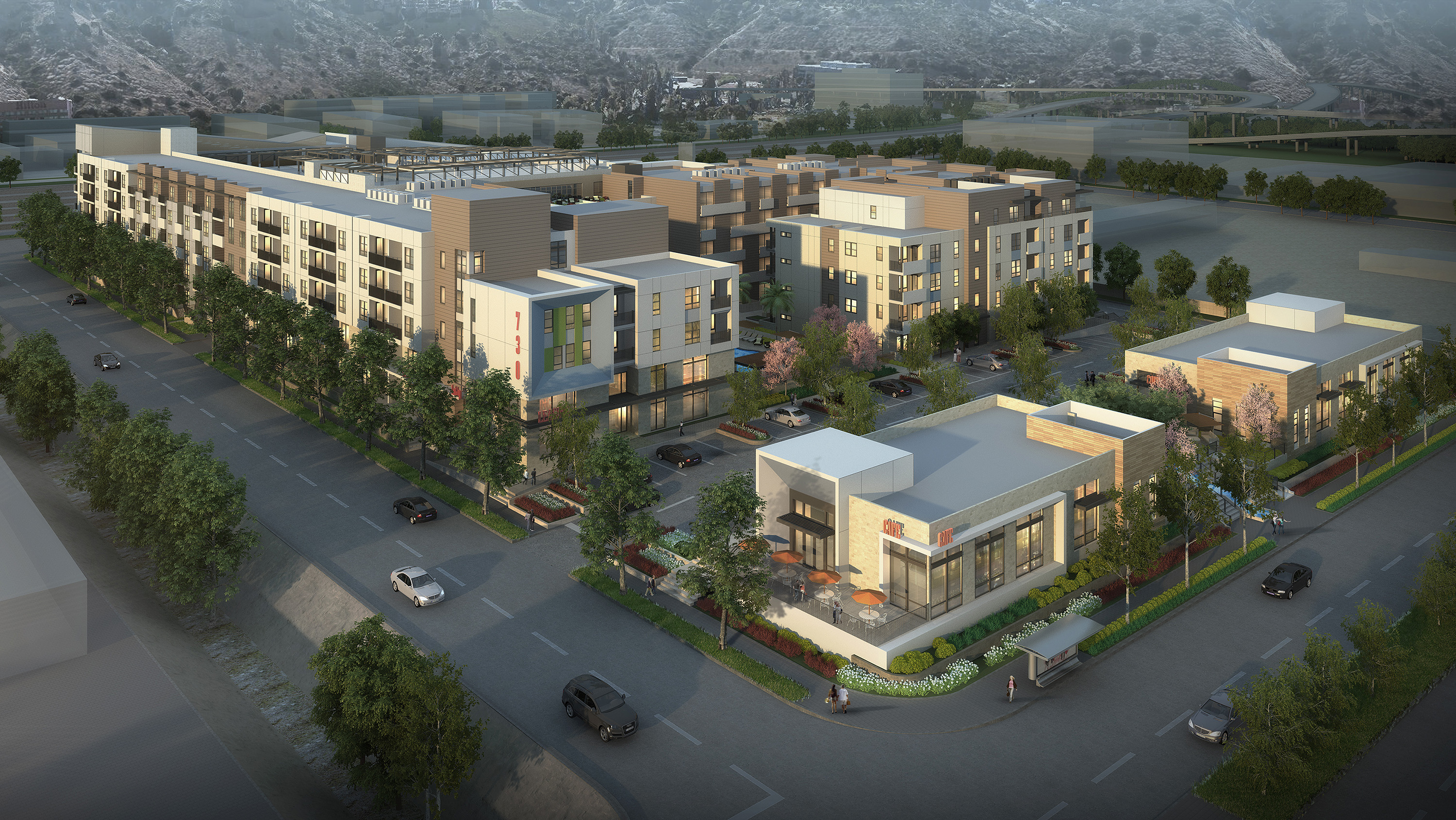 San Diego—TCA Architects has unveiled its plans for Millennium Mission Valley, a large-scale mixed-use residential community in San Diego. The development integrates next-generation multifamily living into what is predominantly a commercial retail district of San Diego.

Developed by the Dinerstein Companies, the project will feature 291 residences, 14 “shopkeeper” live/work housing units and 9,000 square feet of retail space.

The community’s most distinctive feature is its pedestrian walkways, public paseos and single-story retail to build on its link to the surrounding community.

Millennium Mission Valley will be situated on 5.37 acres at the northwest corner of Camino Del Rio North and Camino Del Arroyo in San Diego’s Mission Valley. It is slated for completion in the autumn of 2017.

“As part of the city’s land use requirements, the project had to have three different uses. We designed the project with a mix of commercial spaces, shopkeeper units or live-work units, and multifamily units,” Irwin Yau, TCA Architects’ principal and studio director of the TCA Irvine, Calif. office, told MHN.

“The challenge was to create [a] good marriage of public and private areas for the residents and visitors to interact. To achieve this we created an internal street and a community-friendly plaza and retail space that also help support residential components. Making pedestrian access to and from the site was fundamental in the design, and by carving out 4,000 square feet for a central public plaza provided a vibrant, pedestrian-oriented atmosphere,” said Yau. “Locating the project’s “front door” adjacent to a large public plaza allows for a sense of arrival, all supporting the residential components.”

The development will be fronted by two single-story retail structures. The live-work units feature storefronts, retail awnings and an open ground-floor plan with easy access to the public sidewalks.

The elevations are made more vibrant through the use of punched openings and cantilevered balconies that provide relief and texture to the design.

A public paseo is situated directly behind the retail, providing “curb-able” parking for both residents and consumers. The residential component is set back from the curb by 20 feet, and features a 4,000-square-foot public plaza that will be used as a communal gathering area.

TCA Architects has a design process for every project. As part of that process, the firm explores and examines the existing context and area, Yau explained.

“With each side of the project having different neighbors, each side had to respond with the look and scale around it,” he said.

“For example, the retail areas are on a lower scale so the building steps down to one story to flow with the neighboring properties,” Yau continued. “Again, with the side against the freeway, we used bolder architectural statements that respond to how the building will be seen and reacted to from the freeway. This creates a more interesting building with multiple faces and varying articulation.”