Student Housing in 2022: What the Experts Expect

Although this year began with a surge in COVID cases, the sector’s prospects are still promising.

As the economy reopened and vaccines continued to be distributed across the U.S. in 2021, the student housing industry was also strengthened. Pent-up demand for in-person academic experiences, coupled with international foreign travel resuming, have prompted both domestic and international students to return to campuses, boosting the housing sector at the same time.

“During this past year, we have seen a regained interest from investors in the student housing sector, which is getting stronger as we enter 2022,” David Druey, Florida regional president of Centennial Bank, told Multi-Housing News.

Interest for the asset class is especially strong in markets near top schools. For example, Monarch Heights, a 154-bed recently completed student housing asset near Columbia University in the city of New York, changed hands for $84 million or roughly $550,000 per bed, marking the second-highest per-bed price ever recorded, according to Todd Rosenberg, managing principal & co-founder of Pebb Capital.

And with the student housing sector proving its resilience during the height of the health crisis, large institutional investors have taken notice. Blackstone formed a $784 million joint venture with Landmark Properties to invest in eight student housing properties totaling 5,416 beds across the U.S. Encouraged by the ongoing favorable macro trends in the sector, Brookfield partnered with Scion to acquire a U.S. student housing portfolio of 27 properties with more than 17,000 beds in close proximity to large, public universities. 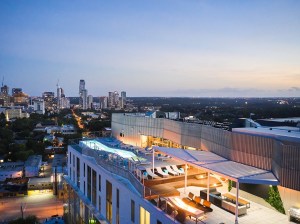 Additionally, foreign investors are also expanding their U.S. holdings. For instance, a subsidiary of Asian real estate giant CapitaLand Investment Management paid $83.3 million for Seven07, a student housing community serving students enrolled at the University of Illinois at Urbana-Champaign. The property is Ascott Residence Trust’s fourth acquisition since entering the U.S. market a year ago.

“There’s renewed investment appetite for large, new developments in areas with high barriers to entry. … This once again is a testament to student housing’s continued resilience, which we expect will lure investors back as the sector continues on its trajectory of increasing institutionalization and maturity,” Rosenberg said.

Although most markets recovered well as students returned to campuses, pandemic-induced disruptions have not disappeared. Jim Kirby, executive vice president of acquisitions at GMH Communities, noticed that in markets where schools had a high international population, enrollment numbers declined due to travel restrictions and student-visa issues. Schools that announced in advance that they would remain virtual for the fall of 2021 also saw decreased enrollments as students shifted toward academic institutions that offered an in-person experience. All these shifts were immediately reflected in housing demand in those particular markets.

Oversupplied markets that were counting on increased enrollment activity to offset supply-demand imbalances saw enrollments flatten or even decline at certain schools, which consequently impacted occupancy and rates, Kirby mentioned. This is why lenders will continue to pay increased attention to the location of a student housing project before closing on financing deals in the year ahead.

“The biggest challenge from a financing perspective has consistently been to select the best location where the demand is far greater than the current supply. Typically, that market is one in which there is a substantial growing student body and where the property is located in close proximity to the campus. This challenge will likely continue into 2022,” Druey told MHN. 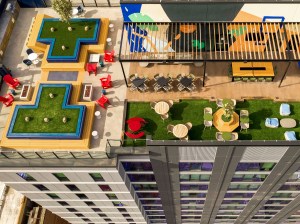 An outdoor amenity space at The Dean, a student housing property near the University of Illinois at Urbana-Champaign. Image courtesy of GMH Communities

Another issue that investors and developers are keeping tabs on this year is a new potential lockdown that could reduce the number of students who are learning in person and require housing. In fact, several academic institutions—Duke University in North Carolina, Stanford University in California and Columbia University in New York—announced in early January that they would begin the semester remotely due to concerns about the fast-spreading omicron variant. Other universities opted to delay the start of classes by a couple of weeks.

And while initial studies show this strain is less serious than the previous ones, the emergence of new COVID-19 variants would definitely cause disruptions across the sector, Druey and Rosenberg both agree.

Is online learning a threat?

Although initially feared, the experts do not expect remote and online education to bring major changes in the student housing industry in the coming year.

“If we learned one thing from the pandemic, it is the value proposition of the live experience of education and the ability to interact, co-work and socialize in person versus virtually,” Kirby said.

Rosenberg believes a hybrid model—much like the office sector—will be common going forward. Both online and in-person classes will be part of students’ lives, and as long as there’s a traditional in-person college experience, demand for student housing will be unaltered, Druey noted.

What do students want? 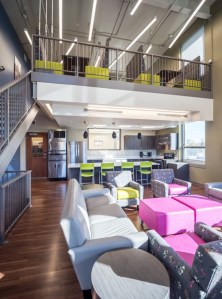 The average college student is part of the Gen Z cohort—the only true digital native generation—and although they’re often lumped in with Millennials, they have different needs, according to KWK Architects Principal Paul Wuennenberg.

“They are the most diverse and most well-informed. They make informed decisions by knowing how to get the information they need to make decisions,” Wuennenberg said.

This is why having a strong online presence and understanding students’ exact needs is crucial for housing providers. Using apps to make requests for services remotely and to communicate in real time 24/7 is one of the things students value most. They also expect to have high-quality Wi-Fi connections, not only for studying but also for shopping online. And operators need to accommodate the ability for them to receive packages as soon as they are delivered.

But as digitally engaged as this generation is, they still value in-person communication, Wuennenberg said. This impacts the sort of spaces and amenities apartment communities should incorporate.

“GenZ is more independent in their learning style, but they want to be in a communal space, not isolated. Alone together,” he said.

As students remain cautious, studios, single rooms and spacious double rooms will likely continue to be in high demand in 2022. This is why one could say that off-campus housing was more prepared to face the pandemic with their unit types. 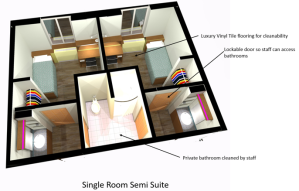 “They had built units with a one-to-one ratio of beds to bathrooms. This is certainly the most expensive unit type, but it does provide the most autonomy within a shared space,” Wuennenberg said.

For new student housing projects, KWK designers have been discussing introducing Jack and Jill bathrooms between two units, but outside of the unit so staff can clean them regularly without disturbing students. This was a popular trend 15 years ago, but Wuennenberg believes it might return as it provides both privacy and safety.

Another trend to watch going forward is the green movement advancing into the area of health and wellness. Students want to have access to fresh air and daylight as much as possible, and they value outdoor and open spaces more than ever.