Self Storage Rents Show Signs of Slowing Down 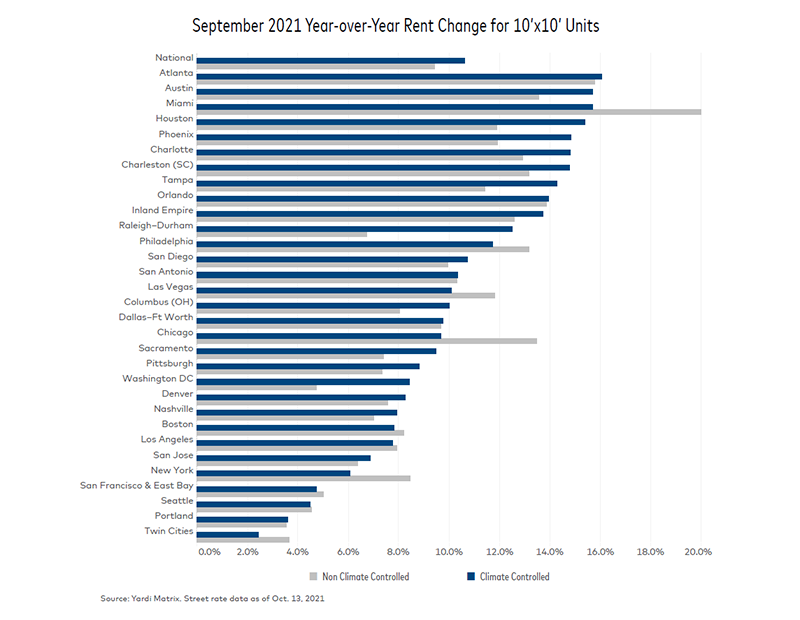 Thanks to healthy fundamentals, the self storage sector remained a strong performer throughout the third quarter of 2021. Street-rate rents have increased 9.4 percent for 10×10 non-climate-controlled and 10.6 percent for climate-controlled units of similar size, year-over-year as of September. Although annual street rate performance was positive in all the top markets tracked by Yardi Matrix, month-over-month performance is starting to lose momentum.

On a month-over-month basis, street-rate rents for the average 10×10 non-climate-controlled units remained flat in September, at $128. While rates for the same-sized climate-controlled units fell 70 basis points, down from $147 to $146. This slowdown in rate growth might be due to the softening of the demand drivers experienced over the past nine months.

Despite slowing momentum, Sun Belt markets, such as Miami and Tampa, continued to showcase strong performance. Miami, yet again, led the nation in rent growth. The metro registered double-digit increases across all unit types, up 20 percent for 10×10 non-climate-controlled and 16 percent for climate-controlled units of similar size, year-over-year in September.

Favorable demographic trends and solid job growth is turning Tampa into a top multifamily performer, underscoring the need for storage space as well. On a year-over-year basis, the metro experienced the highest rates for all unit sizes and types in more than 24 months. For the standard 10×10 non-climate-controlled and climate-controlled units, rates were up 11 and 14 percent.

Nationally, there were 2,399 self storage properties in various stages of development as of September. The development pipeline included 663 facilities underway, 1,248 planned and 488 prospective properties. The new-supply pipeline accounted for 8.5 percent of existing inventory, up 10 basis points over the previous month.

Philadelphia had the largest development pipeline in September, outpacing New York, which had led the top markets in construction activity over the past several months. Projects under construction or in the planning stages accounted for 19.2 percent of Philadelphia’s total stock. There were 60 projects in various development phases, encompassing more than 4.7 million square feet of storage space.