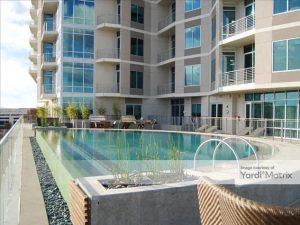 The Heights at Park Lane

Sares Regis Group has acquired The Heights at Park Lane, a 325-unit, Class A+ community in Dallas, according to public records. LACERA sold the upscale property in the Telecom Corridor submarket.

The Heights at Park Lane

Located on more than 33 acres at 8066 Park Lane, the property features one- to three-bedroom units with floorplans between 677 and 3,224 square feet along with penthouse options reaching 3,819 square feet.

Built in 2009, the property encompasses three residential components with varying heights, three-, 15- and 20-story, respectively, along with a four-level garage with 505 parking spots as well as a 45,000-square-foot retail space.

The pet-friendly community features two swimming pools, two sundecks, a wellness and fitness center, a conference room, a lounge outfitted with billiards and a gourmet kitchen, a grilling area, a fire pit with seating area, a playground along with a dog park.

The Heights at Park Lane is within walking distance of several shopping and dining options, within 2 miles of White Rock Creek Greenbelt and less than 3 miles from Southern Methodist University. Downtown Dallas is roughly 7 miles south.

Last July, Sares Regis Group paid nearly $96 million for a 299-unit high-rise in downtown San Diego. The company rebranded the community as LIT Cortez Hill and set aside part of the financing to reposition the property.