The year-over-year increase hit its lowest point over the last seven years, falling by 2 percent and down 70 basis points, according to Yardi Matrix’s latest survey of 121 markets. 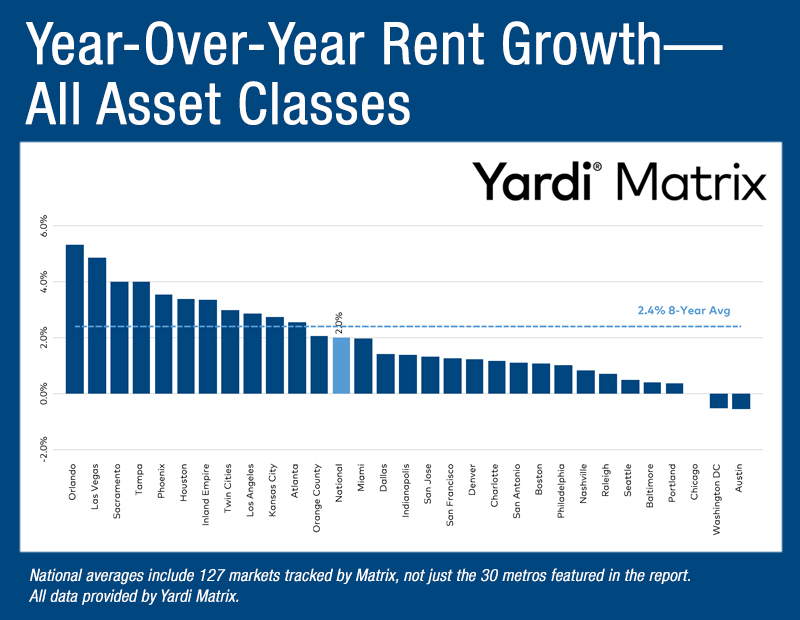 Multifamily rents have again risen $4 to $1,381, up $14 over the last three months. Although this has produced a 1.1 percent year-to-date increase through May, the growth is showing to be much weaker than usual in the current cycle. The year-over-year increase has hit its lowest point over the last seven years, falling by 2 percent and down 70 basis points.

Despite the decrease, rents continue to grow in most metros and have hit a peak of $15 year-to-date. However, this is $10 less than last year’s increase during the same time. According to Yardi Matrix’s monthly survey of 121 markets, rent growth is being held back by the abundant amount of projects coming online in the coming year, roughly 600,000 units under construction. This will make the largest impact in submarkets with the highest amount of scheduled deliveries and luxury apartments that make up 90 percent of the new construction.

In terms of metro performance, Orlando has once again landed at the top, with a year-over-year rent growth of 5.3 percent. This is largely due to its strong employment growth and domestic migration. Rounding out the top four are Las Vegas rising 4.9 percent and Sacramento and Tampa at 4 percent growth. Taking a look at the opposite end, Austin has seen the largest amount of decelerating rent growth with a drop of 0.5 percent year-over-year. Following that is Portland with a growth of 0.4 percent and Seattle rising 0.5 percent.