Small is the new chic. 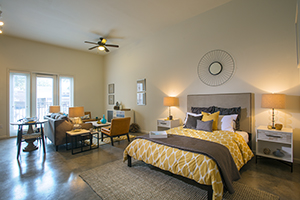 Take a look around the country and you’ll notice that “small” is the new “chic” when it comes to desired rental units. Micro units are popping up everywhere with the thought being that people will be more willing to give up personal space if amenity packages are beefed up and apartments are in desirable locations.

According to Delta Associates, a real estate research firm based in Washington, D.C., developers are building 45 percent fewer two-bedrooms in the District than they did in 2000, capitalizing on Millennials’ desire for small spaces at cheaper rents in more popular locations. For example, D.C.’s newly developed Harper at 1919 14th St. NW consists of rental apartments that offer between 350 to 600 square feet, but it’s situated in the hub of the area’s popular arts district, so people are clamoring to get in.

In Manhattan, My Micro NY is set to open at 335 East 27th St. by the end of the year, with 55 prefabricated apartments of between 260 and 360 square feet of living space. Though compact, the units’ high ceilings will add a feeling of spaciousness, there will also be deep closets, pull-out pantries and counters in the kitchen, and each apartment will have 70 cubic feet of overhead loft space. Balconies will allow all residents to have a connection to the city.

Designed by nArchitects and developed by Monadnock Development and Actors Fund Housing Development Corp., the building was the winning entry in a competition to design and build an apartment tower with micro-units on city-owned land. The competition was sponsored by the New York City Department of Housing Preservation and Development. A similar competition is taking place in Hawaii, where developers are tasked with creating an affordable housing micro unit high-rise that will be built in the 600 block of Cooke Street in Kakaako. Each unit will be a little over 300 square feet and will be leased to people who make less than $57,000 a year. The winning project will be announced this year with the building hopefully ready by the end of 2016.

For these properties and hundreds more like them, developers are going small with the actual size of the units but going large with shared amenities. Rents on micro units may be 20 to 30 percent lower than conventional units, but will bring back more per square foot for the property owner. This is good news for those who dream of living in high-density, expensive metropolitan markets like Boston, New York, San Francisco, Seattle, and D.C., yet feel they don’t have the means of living there.

Defining the term
There’s no single definition of what size a micro unit is, but according to a report by the Urban Land Institute, a micro unit might encompass a small studio or a one-bedroom apartment with a communal “chef kitchen” down the hall, or a rooftop garden and exercise room for all to enjoy. Generally, micro units tend to be between 250-500 square feet. The ULI report notes that smaller units not only enjoy higher overall occupancy rates than mid-sized or larger units, but rental prices—averaging $2.647 per square foot—are up to 81 percent higher.

Tamara Roy, a principal with Boston, Mass.-based architectural firm ADD Inc., which has now merged with Stantec, said micro-units are in vogue due to a demand for lower-priced units in urban areas where there is a supply shortage and a desire by many to reduce their environmental footprint.“It’s a way to use much less energy than the 2,000-square-foot single-family house and two-car garage lifestyle choice, and it saves a lot on commuting time,” she said. “Plus, there’s a cool factor with it. These units are innovative, space-efficient and have multi-purpose designs with great shared social spaces.”

Roy noted the strategy for designing a micro unit is to ensure there’s a place for every function—cooking, eating, sleeping, lounging, entertaining, bathing and storing stuff—but to do so in a creative and interesting way.“For our design firm, it is endlessly challenging to make a fabulous unit in less space,” she said. “It forces us to prioritize and be creative. If you follow the ‘tiny house’ movement, you’ll see the same forces at work—making every inch count. The millennial staff are especially passionate about this topic, because they wish more micro units were being built at a price they could afford.”

Dan Doyle, vice president of development for the Beach Co., Charleston, S.C., said that because the price point for micro units is often the lowest of any floor plans of a property, they are highly in demand. This provides an opportunity to rent for those prospects who would not have been able to afford to live at a given property. “It’s best exemplified in some of the larger metro areas where rents have risen dramatically over the past few years,” he said. “Second, smaller-unit styles are more attractive to residents who want to live on their own—and this is a large segment of today’s renter population.”

The Beach Company has developed a number of studio units in the 450- to 600-square-foot range, focusing on ways to make the unit more efficient. “Adding Murphy beds to living areas, large expansive windows, installing walk in showers in lieu of traditional bathtubs and providing separate storage areas for residents are just a couple of ways developers are making these unit styles more functional—and attractive—for today’s renter,” he said. “We include studio styles in all of our new developments and have found these to be some of the most popular styles offered.”

Small solutions, big problems
Micro housing is not a new concept as many cities have had what were called residential hotels for folks of every level of income. But largely because of the perception of the seedy side of that housing (and the rise of the suburban dream) most cities zoned small units out of existence. Today, a web of regulations, especially zoning issues and the Fair Housing Act, can get in the way of building micro units. “FHA in particular, which requires many dimensional clearances around doors, in kitchens and bathrooms, beds, closets, etc., is extremely frustrating and onerous on compact unit design,” Roy said. “Another large challenge is community groups in neighborhoods where new projects are proposed who fight against small-unit housing under the false assumption that students will rent small units.”

Developers also need to consider the economics of building such units. While micro units have less living area they still need a kitchen and bathroom, which are the most expensive aspects of any apartment, so they are more expensive to construct per square foot. According to Doyle, sometimes adjusting to a small space is just too much for people, especially if someone is downsizing from a larger floor plan or home.

Here to stay
ULI notes that the target market profile for micro units is predominantly young professional singles, typically under 30 years of age, with most under 27 years of age, trending slightly more male than female. Secondary segments include some couples and roommates, some older move-down singles, and pied-à-terre users. Opportunities also appear strong because small units are under-represented in the housing inventory, with the ULI reporting that micro-units comprise less than 3 percent of total apartment development supply.

Micro units are a growing trend across the country with many more communities under construction that will offer these sorts of living spaces in the years ahead.