Sunshine Dairy is set to encompass 271 units, including some affordable ones. 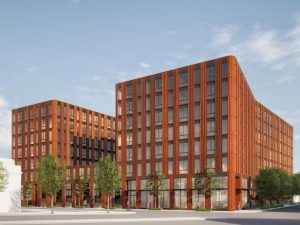 NBP Capital has obtained a $67.5 million construction loan for Sunshine Dairy, a 271-unit multifamily development in Portland, Ore. PCCP provided the financing for the project, marking yet another partnership between the two firms. This summer, NBP Capital also received a $75.5 million loan to refinance Heirloom, a 286-unit Class A community in the same metro.

The developer intends to break ground on the project in this quarter, with completion slated for late 2024. The community, identified by Yardi Matrix as partially affordable, will take shape in Portland’s Central Eastside neighborhood, at 801 NE 21st Ave.

Sunshine Dairy is set to feature 6,000 square feet of community space, a 400-square-foot ground-floor retail space and one level of controlled-access, subterranean parking. The seven-story community will also include a garden plaza, fitness center, yoga studio, kitchen, movie room and coworking space. All apartments will feature quartz countertops, kitchen peninsulas, pendant and recessed lighting, as well as washers and dryers. Units will be delivered in a mix of studios and one, two- and three-bedroom floorplans.

Located two miles east of downtown Portland across the Willamette River, Sunshine Dairy will be connected to several employment districts, including the Portland CBD, the Pearl District, the Lloyd District and the Central Eastside, all within a two-mile radius. Commuting, retail, entertainment and dining options will also be available within walking distance of the property.

Rental demand continues to provide a boost to Portland’s construction sector, as the economy recovers from the impact of pandemic-driven restrictions. The metro regained some 68,000 jobs in the 12 months ending in February.