Rent growth keeps rising, including in gateway metros, according to Yardi Matrix’s monthly survey of 140 markets. 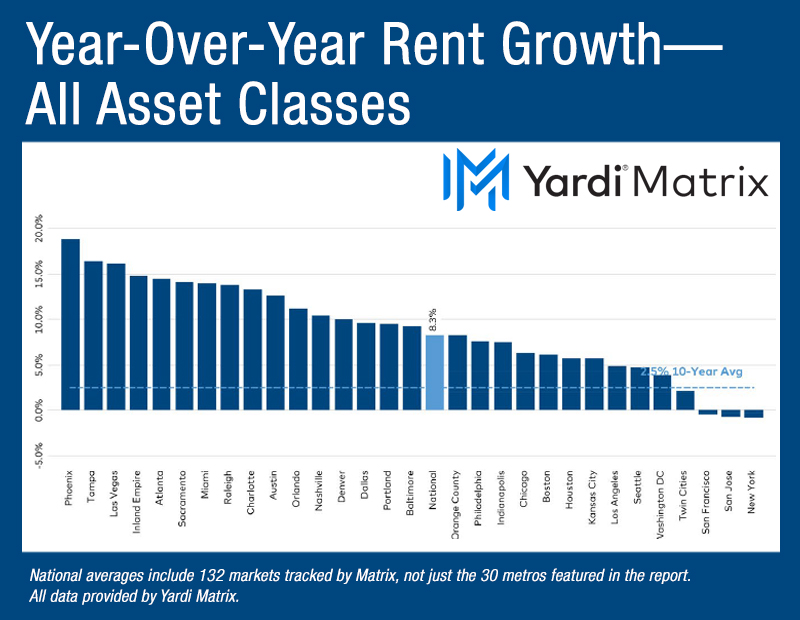 Nationally, Lifestyle rent growth (9.5 percent) continued to outpace Renter-by-Necessity growth (7.0 percent). The trend was mirrored by occupancy: In June, the overall occupancy rate in stabilized properties increased by 60 basis points to 95.2 percent, led by Lifestyle (up 1.1 percent), while Renter-by-Necessity rose 0.3 percent. However, the expiration of the federal eviction moratorium at the end of July raises the question of whether evictions are imminent. Phoenix remained the poster child for rent growth, both for Lifestyle assets (20.7 percent) and overall rent (18.9 percent). Tampa (16.4 percent) and Las Vegas (16.1 percent) rounded out the top three.

On a month-over-month basis, rents rose 1.8 percent, with 26 of the top 30 metros posting rent growth of 1.0 percent or greater. San Jose had its best performance since the onset of the health crisis and led all markets with a 3.6 percent rent improvement. Raleigh followed with a 3.5 percent increase. In New York (3.0 percent) and San Francisco (1.8 percent), rent gains were still below their pre-pandemic period, but residents seem to be returning. If the trend continues, rents will likely return to 2019 levels by year’s end. Midwest cities that posted sturdy performance earlier in the health crisis have now fallen to the bottom of the list—Twin Cities (flat rate), Baltimore (0.7 percent), Indianapolis and Kansas City (both 0.8 percent).

Single-family rents maintained the advantage over the multifamily sector, with national rents and occupancy up by 12.8 percent and 1.2 percent YoY. All top 30 metros had positive YoY rent growth and 19 even posted double-digit rent growth. Cleveland (16.7 percent), Columbus (12.7 percent) and Detroit (12.4 percent) marked solid performance over the last year, but Tampa (31.7 percent), Miami (26.3 percent) and Phoenix (24.2 percent) held the top spots on a MoM basis. On the occupancy side, 26 metros posted occupancy gains on an annual basis, with Tampa (3.5 percent) and Miami (3.0 percent) in the lead.