The final month of the winter slowdown came with yet another rent growth record, up by $10, according to Yardi Matrix data. 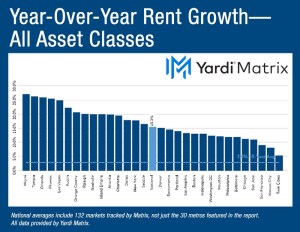 The much-anticipated rent depreciation evaded the month of February, as the market actually defied expectations, with year-over-year growth at 15.4 percent, according to Yardi Matrix’ latest survey of 140 markets. The gain marks a new peak and translates to a $10 rise in the average U.S. asking rent, to $1,628. Moreover, of the top 30 metros, 90 percent posted double-digit rent growth on an annual basis, with the slowest registered in the Twin Cities, at 5.3 percent. Even though rent growth is estimated to slow down below the pace set starting in March 2021, demand doesn’t show signs of cooling off.

The same robust demand continued through the start of 2022, reflected in the average occupancy rate in stabilized properties, which rose 120 basis points year-over-year as of January. Of the top 30 markets, only two had occupancy rates below the 95 percent mark, a significant improvement from 17 a year ago. The occupancy rate points to a rebound in gateway markets, which during the first year of the pandemic saw population declines: New York (2.9 percent), San Jose (2.8 percent) and Chicago (2.6 percent). High-growth/high-supply metros also posted solid increases in occupancy—Nashville (2.3 percent) and Austin (2.1 percent). Phoenix, Sacramento and the Inland Empire (-0.2 percent) and Las Vegas (0.1 percent) reported the weakest performances. However, these markets already had tight occupancy rates and some of the highest asking rent growth performances in the nation, due to their alluring profile to renters relocating from more expensive locations.

On a year-over-year basis, Miami led all markets for rent growth, at 27.0 percent as of February. Another eight of the top 30 markets registered rent growth of 20 percent or more. New York’s leading 2.9 percent increase in occupancy, combined with a 17.6 percent increase in asking rents, signals a return of young workers to city centers. San Jose and Chicago—also heavily impacted by the migration of young workers—saw occupancy rise by 2.8 percent and 2.6 percent, respectively. Hard-hit San Francisco saw rents increase 9.0 percent.

On a month-over-month basis, asking rents rose 0.6 percent in February, led by growth in the Renter-by-Necessity segment (0.8 percent), while Lifestyle rents rose by 0.6 percent. The $10 rent growth in February is another record—the largest increase in rents in February since 2015 had been $4. Leading markets in short-term rent growth were Miami (1.5 percent), Orlando (1.1 percent), and Orange County and Dallas (both at 1.0 percent). At the other end of the ranking were the Twin Cities (0.2 percent) and Baltimore (0.1 percent).

While the pandemic might indeed be on its last legs, COVID-19 has changed the way we work and live. Survey findings—that a substantial number of workers would quit if forced to a full-time return to work from office—coupled with a shortage in qualified labor and sustained productivity in the work-from-home model, have given employees more leverage. This has resulted in new migration trends with long-term implications for the multifamily market—their preference for smaller, less dense and more affordable cities has boosted these markets in contrast to established coastal markets. According to the U.S. Census Bureau, in the 12 months ending in July 2021, Florida (plus 221,000 population), Texas (plus 173,000) and Arizona (plus 93,000) led in population migration gains; meanwhile, California (minus 367,000), New York (minus 352,000) and Illinois (minus 12,000) lost the most population during the interval.

The single-family rental asking rent rose 14.9 percent year-over-year in February, with occupancy remaining flat during the period. Orlando (53.5 percent), Miami (36.5 percent), Tampa (27.6 percent) and Toledo (21.7 percent) were leaders in rent growth, but asking rents grew 20 percent or more in seven metros. Institutional investors increased their involvement in the market: Redfin’s data shows that in the final quarter of 2021, the share of single-family homes purchased by investors reached an all-time high of 18.4 percent, with the Sun Belt as their preferred area.