Prescient recently completed a multifamily building in Denver using a unique manufacturing system that involved a standardized light-gauge steel system. MHN talks to John Vanker, Prescient’s CEO, about their new technology and why their system can provide a cheaper method for developing buildings than traditional plans. 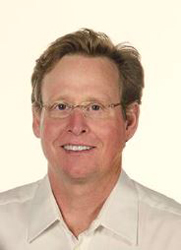 Denver—Prescient recently completed a multifamily building in Denver using a unique manufacturing system that involved a standardized light-gauge steel system. MHN talks to John Vanker, Prescient’s CEO, about their new technology and why their system can provide a cheaper method for developing buildings than traditional plans.

MHN: Describe the LoHi B Street Building. What makes it unique?

Vanker: We have a proprietary framing system that’s patent pending and is unique for a number of reasons. [For example] it’s panelized. We manufacture it here in Denver and then ship it to a job site for installation. It employs a unique engineering and it employs a unique approach to the construction of the building, which is facilitated by our proprietary software.

This was our first building. We built the four stories above the concrete podium at grade level. We were able to get the structure of the building complete in six weeks, and that’s because of the process we employ and how our system goes together. That is the first of its kind, and the second one is being built now.

MHN: What makes it so fast to build? Why is the system faster than traditional methods?

Vanker: There are really only three components to our system: a panel, which we manufacture; truss, which we manufacture—and those are proprietary elements; and a column element. That’s essentially the entire structure, and that goes up very, very quickly. There are very few activities, and there are no specialized skills necessary to put up one of our buildings once you are familiar with the system. It’s also driven by our software—which is what they call an “add in.” It functions in part by Autodesk Revit, which is widely used in the design industry. Lots of architectural firms use Autodesk, and Revit in particular, and our functionality works in Revit. The way it works is when the architect is designing the building, he or she is effectively laying out the structure of the building, fully detailed and fully engineered, automatically. That’s what’s accomplished by our software. 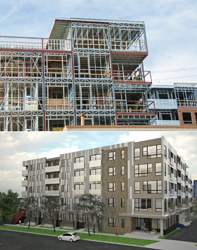 MHN: You mentioned a second building; do you have plans for additional multifamily projects?

Vanker: That’s really where we’re focused right now. The system is ideally suited for multi-unit, dormitory—whether it’s military or student—apartments. In fact, the second building is a seniors apartment project. The first building we did was a market-rate project. We’re looking at a number of affordable, high-density, multi-unit projects also. The system is unique in a variety of ways, but one of the things that we’ve been able to accomplish through combining the software with hardware is to bring the price of a metal-frame building down into a competitive realm with wood framing. This system is considerably less expensive than cast-in-place concrete and other structural approaches. In our industry we see a lot of four- and five-story wood frame buildings going up, and it’s not simply because that’s always the best choice for a particular site, especially in urban areas where the municipality might want more density. They want more units and more height. The problem is, once you go above five stories, then you’re looking at using a much more expensive type of construction than wood. If you could just go one or two more, typically the economics of those deals don’t work. Our system allows a developer to put one or two more floors in a building and not have the large per-square-footage cost. In multi-unit buildings it not only has a lot of value-add as it relates to the system and how the software works, but I think it also allows developers to look at sites in a different way.

MHN: So it allows you to build vertically more easily.

Vanker: Yes, and at a higher density. When you work with wood you could be at $16, $17 or $18 a foot, but if you jump up a floor to concrete you could be as high as $35 or $40, depending on the market. Well, you haven’t increased your density sufficiently to allocate those costs. Typically that’s why we see everyone building these four over ones, essentially. They want to use lumber because of the costs. Our system also has a number of other values. We look at ourselves as being an architectural and construction platform. We like to think that we add value throughout the whole process because through our software and our framing system we integrate the process—from the start of design the architect has a tool that is automatically populating a design with the structure. The software will then create a BIM model, or a 3-D virtual model, of the structure, which is a very powerful collaborative tool for the entire design and construction team because now they’re working with a virtual replica of what is going to get built. They can better plan MEP (mechanical, electrical, plumbing) installation, better coordinate those installations, see clashes early in the virtual process instead of in the field where the costs become very excessive. Each participant—the architect, the engineer and the general contractor with the subcontractors—get to develop a better plan in the virtual stage, and that leads to better execution.

Our structure, unlike wood or concrete, is what they call dimensionally stable. It doesn’t need curing time and it doesn’t need time to compress and shrink, so that enables a compression of the overall project schedule. As our building goes up, the MEP contractors can follow right behind us—they’re installing the sprinkler system and they’re installing the venting and the plumbing almost immediately as we progress vertically. This is not the case with other structural approaches. This allows a compression of the schedule, and a compression of the schedule leads to cost reduction—reduced general conditions, faster to market, reduced cost to carry. The fact that it’s non-combustible leads to the reduction in builders’ risk insurance.

MHN: It’s great that it not only saves cost, but time, which is also cost.

Vanker: Time is money! In the multi-housing industry, everything is driven by cost, and developers are very sensitive to cost. We are a value proposition for all the participants. 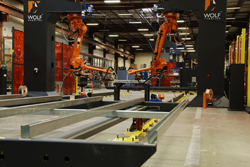 Vanker: Our manufacturing process is somewhat unique. We build a panelizing system, but our software not only creates the model, which becomes the vehicle for better integration of the design, but that model essentially tells us what we’re going to manufacture. From that model we get a precise list of the materials, and we can price that project very early in the design process. From that model we can also integrate our software right back through to the manufacturing process. Our software actually “talks to” our controllers that run our roll formers and our robotic welding. We use ABB robotic welding, which is somewhat unique in our industry. They’re the robots that you see in an auto plant. Our software is essentially telling our equipment which parts and pieces and panels to make, and how they should be welded. Integration is the key to reducing the disconnect and the human error that can occur when translating a document to a machine controller, for example. We don’t have that in our process.