MARKET SNAPSHOT: New Orleans Transaction Market Should Pick Up in 2011

New Orleans—In the wake of the BP oil spill, the Gulf Coast is once again making headlines daily, and everyone is wondering what will become of not only the wildlife, but also the people and industries along the Coast. 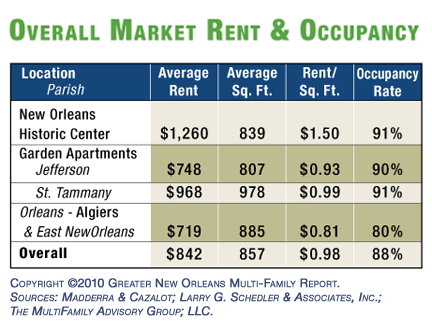 With New Orleans expecting an influx of apartment professionals next week for the National Apartment Association’s annual Conference & Exposition, a look at how what seems like a constant stream of disasters is impacting the city known as “The Big Easy” is crucial.

“The hope down here is that this moratorium on off-shore drilling does not stay in place. The word on the street seems to be that the ban will be lifted before long and that’s certainly what we all want … A lot of people in the fishing industries work the oil rigs, too,” Larry Schedler, CCIM, principal, Larry G. Schedler & Associates, Inc., a Metairie, La.-based multifamily brokerage and advisory firm, tells MHN.

“The other side of the equation is—and I don’t know if this has been decided yet—but if the litigation for the BP thing is in Louisiana, it’ll be done in New Orleans,” Schedler adds. “That [would be] a tremendous boom for downtown apartments, but I guess it’s too early to tell—but you can only imagine the need for housing that would be created with that.”

However, “Right now we are doing better than most markets; a lot of that has been propped up, because in the wake of Katrina, there [was] a lot of rebuilding money in this part of the country,” says Schedler.

Though White is not offering concessions at any of her newer properties, she does say that they are being offered at older communities “because I’m losing people to the newer product.” Schedler also notes that rents have declined, on average, about 5 percent.

On the transaction side of things, sales volume slowed considerably in the fourth quarter of 2009, according to Schedler, who points out that in the aftermath of Hurricane Katrina, roughly 25 percent of the market traded hands.

That being said, however, 2010 looks more promising, though Schedler believes that most of the conveyances won’t take place until the end of the year. “I think 2011 will burst open, not just here but all over the country,” he asserts.

Cap rates are between “50 and 125 bps higher than what you’d see in a bigger metro area,” Schedler tells MHN, adding that New Orleans properties typically range in the 7 to 8 cap range.

Overall, though, it appears that the New Orleans apartment has hit bottom and is on the rebound, however slowly that rebound might be—as Schedler notes, “We have stopped the bleeding.”

While there may be investor concerns in New Orleans, the market does have a number of bright spots, including the high barriers to entry. Plus, as Schedler notes, “people want to live here … There’s a certain way of life.”