The Atlanta market recently boasted its seventh consecutive month of job growth, and it is also benefitting from a number of corporate relocations. 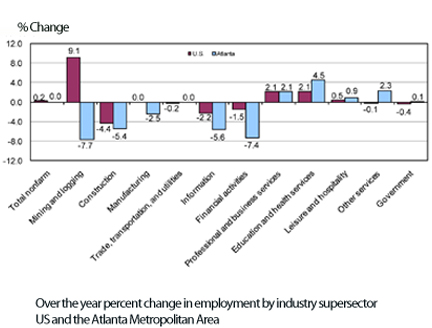 “This was an opportunity for us to acquire a very well-designed, well-located luxury community that we think fits very well into our multifamily portfolio. It’s in close proximity to major employers and amenities that young, urban professionals are looking for,” Jason Mattox, chief administrative officer, Behringer Harvard, tells MHN.

The Atlanta market recently boasted its seventh consecutive month of job growth, Mattox notes, and it is also benefitting from a number of corporate relocations.

According to the U.S. Bureau of Labor Statistics, the Atlanta metro area gained 24,600 jobs from August 2009 to August 2010, mostly in education, health services and professional and business services, offsetting a loss of 24,400 jobs in other industries. Education and health services were the largest job gainers, adding 12,100 jobs over the 12-month period, and growing at a 4.5 percent pace. Professional and business services added 7,700 jobs from August a year ago.

The overall Atlanta metro, reports Mattox, experienced positive net absorption in the first half of 2010, with vacancy declining 0.7 percent since the end of 2009. At the same time, concessions are decreasing, with some in the industry projecting about a 7 percent growth in effective rents over the next three to five years.

While overall occupancy is in the low-90 percent range, Class A properties are experiencing somewhat better performance, with a 6 percent to 7 percent vacancy, notes Mattox.

While there are many bright spots in the Atlanta apartment market, including its relative low cost of living, young demographics and job growth, Mattox does note that the metro “has been witness to significant development—while that certainly occurred in the previous boom and there has been a break we’re enjoying, I think there’s potential to add supply. That’s why infill locations are so attractive, because they won’t compete on the commodity level that suburban assets will.”