By the Editors of Multi-Housing News
December 16, 2016
NAHB 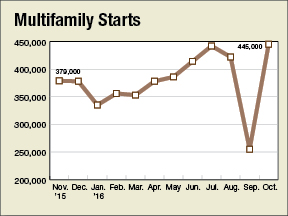 According to the U.S. Census Bureau and the U.S. Department of Housing and Urban Development, starts of buildings with five or more units rebounded to a pace more consistent with the levels recorded in recent months. Following a 39.6 percent drop in starts of five or more unit buildings in the month of September, from a seasonally adjusted annual rate of 440,000 to 269,000, starts of these buildings recovered to 454,000 in October. With the return to earlier levels recorded in October, the average number of starts over the first 10 months of the year is 391,000. Over the first 10 months of 2015, the number of five or more unit housing starts averaged 396,000 per month.

As 2016 winds down and we look to 2017, NAHB’s Multifamily Production Index (MPI), which measures builder and developer sentiment about current conditions in the apartment and condominium market, confirms that the multifamily market will have a strong year in 2017. The MPI posted a three point gain to 53 in the third quarter of 2016. The index and all of its components are scaled so that a number above 50 indicates that more respondents report conditions are improving than report conditions are getting worse. This quarter marks the 19th consecutive quarter in which the MPI has been at or above 50. Historically, the MPI has performed well as a leading indicator of U.S. Census figures for multifamily starts, providing information on likely movement in the Census figures one to three quarters in advance. 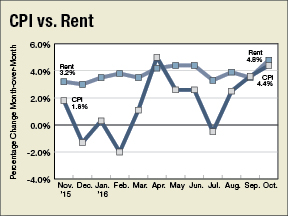 Over the month of October 2016, growth in the headline consumer price growth (CPI) rose for the third consecutive month consistent with the performance of energy prices over this period. In October, the CPI rose by 0.4 percent. In September, the CPI increased by 0.3 percent while in August inflation was 0.2 percent, and in July it was flat. Energy prices grew by 3.5 percent in October after rising by 2.9 percent in September. In August, energy prices were unchanged after falling over the month of July. Meanwhile, food prices have remained unchanged for the fourth consecutive month. Excluding the historically more volatile prices of energy and food, “core-CPI” rose by 0.1 percent, similar to its rate of growth in September, 0.1 percent, and slower than the 0.3 percent growth rate recorded in August. Shelter prices, which account for the largest portion of consumer expenditures, rose by 0.4 percent in October, also similar to the 0.4 percent rate of growth in September, as rental prices, a component of overall shelter prices, grew by 0.4 percent over the month. Since the increase in rental prices exceeded the monthly rise in overall inflation, as measured by core-CPI, then NAHB’s Real Rent Index rose, increasing by 0.2 percent on a monthly basis. More precisely, rental prices grew by 0.39 percent over the month of October and core-CPI rose by 0.15 percent resulting in a 0.24 percent increase in NAHB’s Real Rent Index. Over the past 12 months, the Real Rent Index has risen by 1.6 percent. 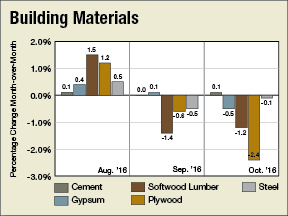 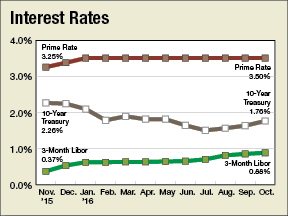