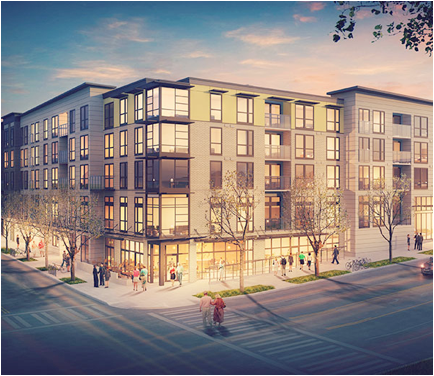 Legacy Partners considered this an excellent development opportunity for several reasons. “The immediate vicinity of the project three years ago was characterized by economically obsolete small commercial buildings,” Legacy Partners senior managing director Kerry Nicholson told MHN. “It did not yet look like a very attractive neighborhood. However, cool, hip restaurants and shops were beginning to locate there [which is] one of the best ways to tell if a neighborhood is turning in a positive direction. Couple that with the fact that the burgeoning Amazon campus is just to the south of Lake Union, now joined by growth at Google and Tableau, and this looked like a can’t-miss site.”

Also included are a sports lounge, poker room and animal-friendly spaces that include a dog run and chicken coop.

Legacy Partners originally targeted a build-to-yield (current NOI over current costs) of 6.2 percent. “Before we could start, costs escalated considerably, but so did rents, enabling us to start the project with a very satisfactory return,” Nicholson added.

A significant project size of 278 units, dramatic views of Lake Union and the Seattle skyline, quick access downtown via SR99, bike-ability to the Amazon concentration in South Lake Union and to the University of Washington were all among the pluses of the site, Nicholson said. Among the negatives was a complicated assemblage of 10 parcels, almost all of which posed environmental challenges that needed addressing.

The development has been created with a high finish level and is the most highly amenitized project in the submarket. “That, plus being bid out in an environment of rapidly rising construction costs, led to the project being contracted at a number higher than the initial estimates,” Nicholson said. “However, the combination of regional rent increases and the neighborhood now being discovered has led to significant rent increases, which keep the project economics at a very satisfactory level.”

Bowman Apartments stands amid the next big Seattle enterprise hub. Situated in the Wallingford neighborhood, with its tree-lined streets, independent theaters and neighborhood shops, the property sits between Greenlake and Lake Union. Nearby Fremont is known for ethnic dining spots and hip cafes.

It is also a short distance away from the vibrant shopping, dining and entertainment scene along 45th Street, as well as Fremont Avenue and the burgeoning Stone Way commercial strip. Tableau and Brooks’ global headquarters are within walking distance of the development, and downtown is a bike ride away.

“The residents at the Bowman Apartments will enjoy the benefits of all the retail and restaurants of the Wallingford neighborhood and nearby Fremont,” Nicholson said.  “With ground floor retail, over 8,000 square feet of interior amenity spaces and an incredible rooftop deck with sweeping views of Lake Union, downtown Seattle and Mt. Rainier, this will be a place they will want to come home to.”